Foundation in Chinese language best built from a young age 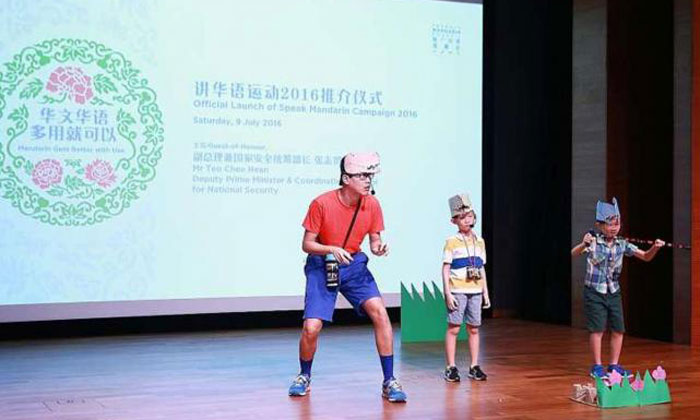 Mandarin is an important avenue through which the Chinese community can pass on its values and traditions to the younger generation.

But the foundation in the language is best built from young, said Deputy Prime Minister Teo Chee Hean yesterday (July 9) as he launched this year's Speak Mandarin Campaign.

Highlighting his own struggle with the language having grown up studying Malay in school, he emphasised the role of parents in helping their children pick up the language.

"Even though a larger proportion of households are now using English as the main language at home, most young parents today have some foundation in two languages, and are better equipped linguistically to help their children learn and use Mandarin."

Mr Teo, who is also Coordinating Minister for National Security, delivered his speech to an audience of about 170 at the National Gallery Singapore.

Even though he did not have a solid foundation in Chinese, he credits studying it in his early years for his ability to speak it now.

He studied English, Malay and Chinese in Primary 1 and 2, but had to choose one second language when Singapore merged with Malaysia. His parents chose Malay.

From then on, he picked up Chinese only through informal lessons from his cousin. He "did not take it very seriously" and used it sparingly. It was only when he entered politics in 1992 that he began working to improve his command of the language.

Mr Teo said: "While I may not have reached the stage of 'Mandarin gets better with use' (the slogan of the campaign), I would certainly say one can only get better with practice."

The Speak Mandarin Campaign, in its 37th year, will feature a public talk on the cultural significance of a Chinese character's strokes and writing, as well as Chinese music programmes at restaurants and

The one-hour music programmes will feature up-and-coming Singaporean singer-songwriters who will speak about the use of Mandarin in their music. Over 140,000 notebooks containing comic strips in Chinese have been given out to the public.

Minister for Culture, Community and Youth Grace Fu, who was also at the launch, said Mandarin is an important means for the Chinese community to pass on their heritage. "That is why we have continued to place emphasis on the use and learning of Mandarin over the years."

The year-long campaign, which will end in the middle of next year, also includes a Parent-Child Talent Competition which encourages parents to teach the Chinese language to their children through story-telling and role play.

The family had won the pre-school category in May with a skit about a young bear who had to fight off an unwelcome guest at his birthday party.

Madam Teo said: "Pre-schoolers don't often get to perform in front of crowds so we thought the competition was an opportunity to do so. Plus it was a chance for him to polish his Mandarin."