Oh no she did not! Girl pranks boyfriend with shaved eyebrows -- and he flips out 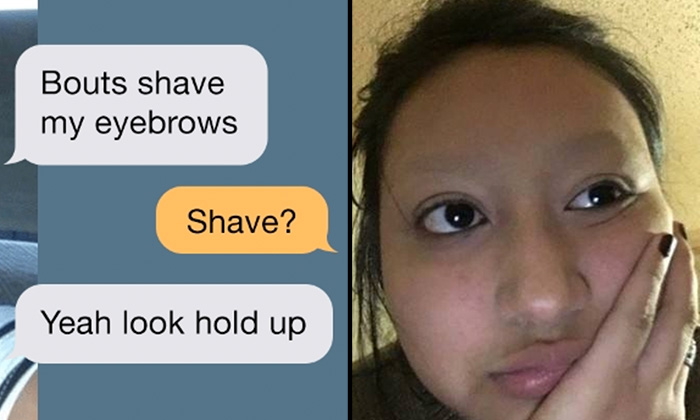 A 17-year-old girl decided to prank her boyfriend with an epic eyebrow prank and of course, her man totally bought it and freaked out.

According to Distractify, Lizette Galvan was sitting at her vanity when she remembered about a Yoda transformation makeup tutorial she came across awhile back, and got a bright idea of pranking her boyfriend.

Using the glue-stick trick, Lizette tricked her boyfriend into thinking that she had shave her eyebrows.

Photos in the gallery above show her hilarious conversation with her boyfriend.

At first, when she texted to tell him that she shaved her brows, he was rather apprehensive, and gave her the benefit of doubt.

However, when Lizzie sent him a photo via Snapchat of her "shaved eyebrows", he flipped out.

She even went a step further and sent another picture of her with crappily drawn-on eyebrows.

Her boyfriend tried to FaceTime her but she did not pick up.

Lizette thought that her boyfriend's freakout was hilarious, and so she chronicled the madness on Twitter.

Of course, she eventually revealed to her boyfriend that the prank was just a prank and all was well.

Although she admits that she gave her man a "mini heart attack".