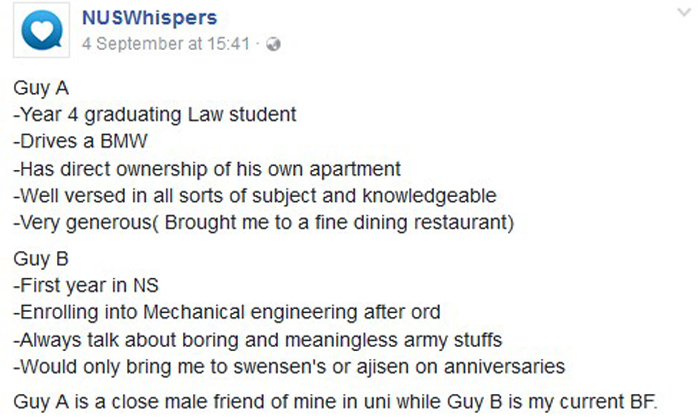 A university student's confession on NUSWhispers, an anonymous confession page, has erupted into a heated debate among netizens and crushed two guys' hearts all at the same time.

On Sep 4, the girl posted about how a close university mate of hers was making her rethink her relationship with her current boyfriend.

She also compared both men, stating that 'Guy A' is a law student in his final year who owns a BMW, has his own apartment, is knowledgeable and also very generous.

On the other hand, she said that her boyfriend 'Guy B' is in his first year of National Service, is boring and talks about meaningless subjects, as well as implied that he does not splurge on her.

In addition, the girl also confessed that Guy A had hugged her to sleep when she needed 'emotional support' and that she had once cancelled on a date with her boyfriend to go out with A instead.

She ended her post by saying, "As of now, I haven't cheated on my BF yet, I giving him one more year to change for the better."

The post went viral in no time, having garnered over 3,600 shares to date.

Majority of the comments blasted the girl for being 'materialistic' and a 'gold-digger'.

Besides telling her to break up with her boyfriend and let him go as she did not deserve someone as good as him, they also pointed out that what she did was counted as emotional cheating even if she did not think so.

Guy A also received some flak, as it was assumed that he had known about the girl's boyfriend but pursued her anyway.

Days later on Sep 6, the girl made a new post and apologised for what she said.

Implying that her boyfriend had found out about what happened, she said she still loves him deeply and is grateful for his forgiveness.

She also wrote in the posting, "P.S. Guy A, don't look for me again. I promised my BF to never meet you again."

This time, netizens urged for her boyfriend to dump her anyway as they felt that her apology did not change how shallow she was.

"Only saying this because you got called out," commented one user.

However, if you thought this was the last you would hear about the love triangle, you are very much wrong.

The online drama escalated even further when Guy A spoke out about what happened and gave his side of the story.

It turned out that he was not aware that the girl was already attached.

"I was serious about her. I'm not anymore," he said.

Urging for the girl's boyfriend to leave her and expressing his guilt over the incident, he also revealed that he and the girl had even kissed -- a fact that she conveniently failed to mention in her original posting.

He wrote, "If a friend hadn't shown me this as a funny story, I probably would have never found out that the girl who told me to wait for her response had a boyfriend."

Netizens were much more sympathetic towards him after his startling revelation, though some were doubting the authenticity of the entire saga by this point.

And if you thought this would be the end of it, you are wrong once again.

Guy B, the girl's boyfriend posted his side of the story yesterday (Sep 7) and expressed his disappointment over what happened.

Admitting that he is indeed a frugal person who scrimps and saves at every chance, he also revealed his intentions of marrying the girl and purchasing a BTO flat together.

However, he added, "On the other hand, I purchase big ticket items like her trip overseas as well as some branded items for her despite us dining at mediocre eateries.

"I'm disappointed with our lack of communication and despite being heart broken, I suspect it would be hard for me to break away. I need some time to heal."

And you thought your favourite television show was dramatic.

Read the full posts from all three parties and netizens' comments in the gallery.

Related Stories
Women confess the shocking secrets that they are hiding from their husbands
Ridiculous excuses that people give for cheating on their partners
Painful confessions on what it's like to lose the spark in a relationship
People confess to losing their virginity during one night stands
From sweet to heartbreaking: Here's what happened when people said 'I love you' for the first time
More About:
confession
cheat
cheating
youths
student
students
couple
heartbreaking
facebook
NUS