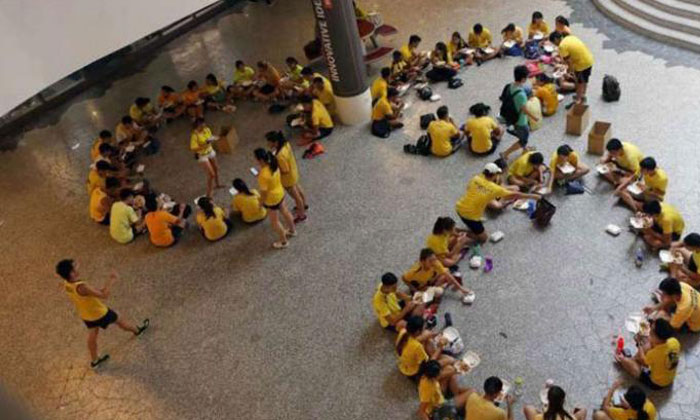 Come the next National University of Singapore (NUS) freshman orientation, there will be one more person attending: a student safety officer to whistle-blow on inappropriate activities.

Workshops will also be conducted beforehand with student leaders and staff advisers to ensure they lead activities in a "safe and respectful" manner.

These are among the new guidelines released by the university yesterday in an effort to stamp out a decade-old practice of raunchy orientation games.

The latest iteration, in late July this year, was especially controversial: NUS students complained about being coerced into taking part in sexually suggestive activities, including being forced to simulate a rape scene.

It led to the suspension of some student-organised orientation activities and calls for a comprehensive review of how activities at orientation camps are carried out. Disciplinary action was also taken against 30 senior students for their role in the activities.

In a circular sent to students yesterday and obtained by The Straits Times, NUS' deputy president (academic affairs) and provost Tan Eng Chye listed the recommendations by a 13-member orientation review committee, which included faculty members, student leaders and alumni. The university management has studied its report and accepted all recommendations, he said.

About 160 students, including orientation committee members and freshmen living on campus, were also consulted.

Measures include a new framework for orientation. Guiding principles state that orientation should be "enjoyable, educational and memorable". All freshmen should also feel "welcomed, assured and supported".

The selection process for student leaders of orientation camps will be tightened, with a selection panel made up of mostly students putting candidates through tests to demonstrate whether they have the right values and attitudes. At least one student leader will also be appointed as a safety officer at each camp, and he or she will report on or put a stop to inappropriate behaviour.

Previously, orientation guidelines did not have these additional layers of checks or personal training. In the past, student leaders went through written materials with examples of "dos and don'ts". They were also briefed about banned activities such as those involving physical intimacy between members of the opposite sex and ragging.

A practice that requires staff advisers and the Office of Student Affairs to approve plans for orientation will continue, and workshops and talks that "enhance awareness and promote diversity, sensitivity and respect among the student community" should also be adapted and incorporated into orientation programmes by more student groups, said the circular.

Ms Drima Chakraborty, 20, a second-year NUS student, hopes to see more workshops on consent being conducted for freshmen. "The peer pressure that some freshmen might feel (about being coerced into joining activities they are uncomfortable with) still gets dismissed or downplayed. There is a culture of protecting your comrades even if they are in the wrong."