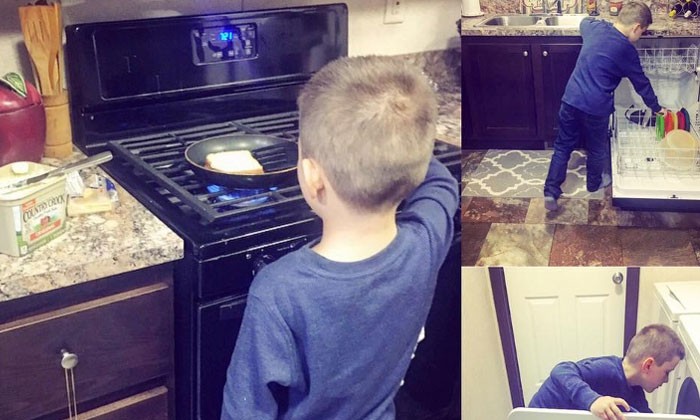 A mother teaches her son to be the right man by letting him help with household chores and some are just not happy with it.

Nikkole Paulun is a mother who has a number of followers on social media due to her participation on MTV's reality show 16 and pregnant.

She is now 22 years old with a son and a daughter.

She posted on her Facebook page pictures and a caption which talks about her son who has been helping out with chores.

The caption reads, " I teach my son to cook & do household chores.

"Why? Because household work isn't just for women.

"Because one day he might be a single man, living on his own, (someone) who will actually know how to do laundry & not eat take out every night.

"Because one day he might want to impress a significant other with a meal cooked by his own hands.

"Because one day when he has kids & a spouse, he's going to need to do his fair share around the house.

"Because I live in a generation of people who complain that school didn't teach us how to cook, do laundry, tie a tie, or pay taxes.

"Because teaching my son how to do these things and be a productive member of society both outside the home and inside, starts with ME.

"Because it's okay to let your child be a child but still teach them lifelong lessons along the way.

"My son will never be too "manly" to cook or do chores.

"He will be the kind of man who can come inside from changing a tire to check on his pot roast.

"Who can properly sort his laundry and mow the lawn too.

"Remember parents, a man who believes he shouldn't have to cook or do chores was once a boy who was never taught any better. "

Some mothers responded by sharing photos of their son doing chores as well.

However, according to Distractify, others are not that supportive.

One asked her if she would teach her daughter to do jobs that have been associated with the male gender like changing a tire and mowing the lawn.

Paulun replied, "Yes, my daughter will know how to do all of those things. She's just too young to teach still. They're raised seeing me do both since I'm a single mother.

Paulun replied very politely how her son helps her along the way and earns his allowance. The majority of the house work is still done by her.

She then shared a photo of her son relaxing and playing video games.