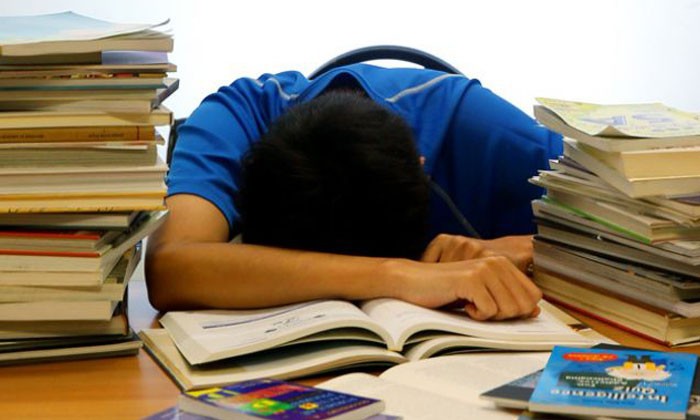 A veteran educator herself, Mrs Marietta Koh pays around $2,000 per term to put her daughter through tuition classes.

This is despite her belief that tuition can hurt society, since not all can afford it.

Is tuition a necessary evil? She certainly thinks so.

Mrs Koh says: "The idea that education is the great equaliser used to be true, but things have changed as parents become more affluent.

"The rising trend of tuition is worrisome because it is money that gives parents the ability to purchase advantages for their children."

Mrs Koh, once a secondary school and junior college teacher and later a tutor, knows of parents who pay $5,000 a month for tuition, as well as those who struggle to pay the fees.

Yet when it comes to her daughter, she admits that she has to think differently.

"When I think from a parent's perspective, my priority changes to what's best for my daughter. Every parent wants the best," says Mrs Koh, who is now a curriculum development consultant.

This compulsion to give one's children an academic advantage has contributed to a burgeoning industry that is worth more than $1 billion, up from $820 million in 2008.

Seven in 10 parents send their children to tuition classes, according to a 2015 survey.

Some, like Madam Mala Ramakrishnan, believe that tuition has become a necessity.

She took up a second job to pay the hefty tuition fees, believing the extra classes would put her children on par with others.

There are around 850 tuition centres and enrichment centres registered with the Education Ministry, up from 800 in 2014 and about 700 in 2011.

So fierce is the competition that tuition centres have to innovate to stand out from the pack.

Centres differentiate themselves by offering additional perks, such as free shuttle services to the tuition centre and free ice cream while studying, reported The Straits Times last week.

Mrs Koh says the more expensive tuition programmes offer a curriculum that is more intensive than what is taught in schools.

At The Learning Lab, where she used to give private tuition, primary school children even take up current affairs programmes so they can learn to be "more sophisticated" than their peers.

Mrs Koh says: "They learnt about current topics like the financial crisis in 2009, and are able to understand (news events) better. These children will have an edge over others.

A former National Institute of Education lecturer, Dr Yeap Ban Har, says this trend of including play with learning is rooted in research and learning theories.

He says: "Maybe these tuition centre owners feel that schools are not doing enough of this and want to offer that experience for children.

"Plus, it offers parents who can afford it another option - not more of the same thing."

There are cheaper options, too, but experts say that parents are willing to pay more for a perceived guarantee that their children's grades will improve.

Dr Kelvin Seah, an economics lecturer at the National University of Singapore (NUS), says: "The effectiveness of tuition depends on the tutor and the way to know if the tutor is good or not is to see his past experience and record.

"That's why brand-name tutors, like some super tutors out there, can charge much higher rates."

Because those who can afford it will be able to pay for better tuition, Dr Seah believes that the obsession with tuition can end up widening the gap between "the haves and the have nots".

"It has been a focus of education research, whether tuition here leads to inequality and, by and large, research does show that it is the case," says Dr Seah.

While schools are perfectly able to help weaker students through supplementary classes, many parents would still rather pay for tuition.

Dr Seah says: "The reality is that parents think they are taking an educational risk here by relying solely on the school. They see other kids go for tuition, so their children have to go, too."

Dr Tan says: "We have heard so much about parentocracy and how parents try to give their children an advantage in the mobility game.

"Tuition can un-level the playing field, giving students from families with the means a boost in their performance in academic subjects, exposure to enrichment courses, even grounding in useful skills.

"In short, it can result in unequal relative social mobility."

She spent half of monthly income on her kids' tuition

On some days, Madam Mala Ramakrishnan, 45, would look at her balance sheets and cry.

For two years, nearly half of her monthly income as a legal secretary went to pay for tuition for her three children - aged 15, 13 and 11 - and the rest would be used for rent, bills and food.

The centre-based tuition cost her $200 per child.

To make ends meet, the single mother took up an additional job as a house maid, earning another $100 each week.

"Life was hard then, it was a struggle and I was so tired every day that I didn't even have time to spend with my kids," she says.

The family lived in a one-room rental flat after an amicable divorce in 2009.

Although they had a roof over their heads and just enough money to get by, the environment was not conducive to her children's studies.

Madam Mala says: "It was a messy neighbourhood and there were many fights and quarrels every night."

But to her, tuition was always a necessity as it gave her children the chance to be on an equal footing as their classmates.

If her children did well in their studies, perhaps they may end up in a better place in life than her, she thought.

She also received calls from teachers who told her that her children's grades were slipping, which worried her further.

Madam Mala says: "I didn't want my children to be looked down on because of their grades.

"I believed that I need to do more for them, even if it means that I have to take up an additional job, then so be it."

Today, she no longer juggles two jobs as she has found additional income in her online business as a beauty consultant.

She has also taken her children out from centre-based tuition as it had little effect on their grades, but she paid $2,000 to sign her 13-year-old daughter to an education programme that encourages learning.

Living on tight budget, with no savings

His family of four can live quite comfortably on their total household income of $3,800, says cabby Goh Teck Seng.

Except that he spends $2,100 on tuition for both his children, he tells The New Paper on Sunday.

Mr Goh, 45, used to drive the morning shift, but since last year, he has been on the road for about 12 hours a day, six days a week.

His wife, Madam Linda Tan, makes about $1,400 a month working two jobs, as a clerk and as a cleaner in a karaoke lounge.

Mr Goh, who lives in a three-room HDB flat, says: "We are thrifty and we have no debts. But we also live on a tight budget with no savings for now."

This is so that he can pay a private tutor for his son, 15, and send his younger daughter, 11, to a popular learning centre.

His son, he says, is an average student who needs help in maths and English.

"We want him to do well enough to get into a junior college," adds Mr Goh.

His daughter was on the waiting list for about six months before she got a place in a leading education centre.

He says: "Our daughter is the smarter one, so we want to invest in the best for her."

Mr Goh admits that his daughter's school offers supplementary classes for the pupils, but says he does not want to take the risk.

"It's not that the teachers are lousy, but there are about 30 children in one class, so how much attention can they give to my daughter?" he says.

"We would prefer to make our own sacrifices so that we can give her a head start in life."

'It's better to pay more for proven quality'

Madam Florence Chan, a housewife, was given a blank cheque by her husband to spend on her son's tuition.

"Pick whatever is the best out there," her husband, who is a director in a contractor firm, told her.

So she did exactly that, spending days going through online forums to research options for her 16-year-old son.

They now spend nearly $1,000 every month on small group tuition for various subjects at the junior college level, including economics, his weakest subject.

Madam Chan, who is in her 40s, says: "We noticed that he needed to buck up. If he stays at home, he would be playing computer games rather than studying.

"Now, he is a lot more disciplined."

Madam Chan says her son's tuition class covers topics 30 per cent faster than the school. At lectures, he is able to grasp concepts better since it was already taught in tuition.

She declines to share what their household income is.

"I'm blessed that we do not have to worry about money.

"Yes, we may have to give up some luxuries, but investing in your own children is always the right option," she says.

"I could have paid less for tuition, but the quality of the tutor may not be as good. It's better to pay more for proven quality."

Related Stories
Are supplementary classes after school really necessary?
Preparing for exams: 'Like the whole family is sitting the PSLE'
New school to charge expat kids half the usual fees
More About:
teacher
money
$2000 on tuition
school