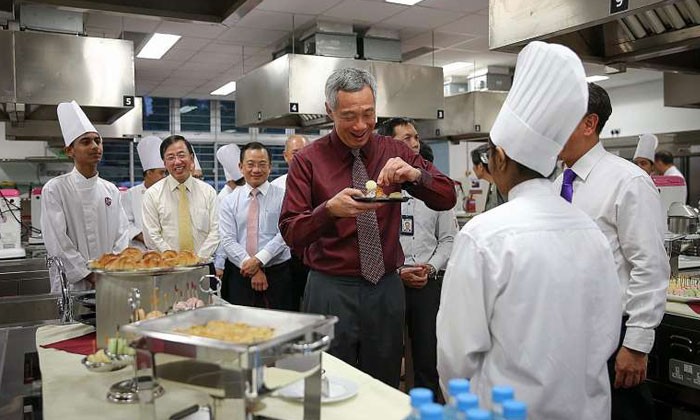 More students from NorthLight School - a specialised school that takes in those who failed the Primary School Leaving Examination (PSLE) - are furthering their studies at tertiary institutions.

Currently, about 45 per cent of students move on to the Institute of Technical Education (ITE), up from about 30 per cent in its initial years.

Today, more than 1,400 students have completed their education at NorthLight. Fourteen have done well enough to jump from the ITE to polytechnics and, so far, three have graduated with diplomas.

Others have gone to hospitality institutes such as Shatec and private institutions like Kaplan Singapore.

But when NorthLight started in 2007, many thought it would fail.

The school's founding principal, Mrs Chua Yen Ching, said many did not think its students would be able to progress to tertiary institutions.

The school has since proven its critics wrong.

NorthLight's current principal Martin Tan, who took over in 2011, said: "A model like this works for those who appear to be struggling in their early years of education."

He said teachers at the school do more than just teach and would make countless home visits, take students to the doctor, buy food for students who are hungry and even provide counselling.

Some former teachers have since brought NorthLight's best practices, such as its hands-on approach to teaching, to their current schools.

In 2009, the Ministry of Education (MOE), inspired by NorthLight's progress, started Assumption Pathway School, which also takes in those who fail the PSLE.

In data released by MOE last year, before these two specialised schools were set up, about 60 per cent of pupils who had failed the PSLE would drop out of school. With the two schools, this has been lowered to about 10 to 15 per cent.

Yesterday, NorthLight was lauded by Prime Minister Lee Hsien Loong, who said its success is a result of the effort put in by many different individuals, including passionate educators who volunteered to teach at the school.

"NorthLight has not only changed the lives of its own students, but it has also influenced our wider education system," Mr Lee said. "It has helped us rethink how we should develop a school's culture, and how teachers relate to students and to the curriculum."

He was speaking at an event to mark NorthLight's 10th anniversary and the official opening of its campus in Towner Road, its home since December 2014. NorthLight welcomed its first 228 students at its former Dunman Road campus.

When Secondary 4 student Syafiee Abdullah, 16, entered NorthLight four years ago, he was disappointed that he had failed his PSLE.

"But the teachers here, they inspire me and tell me to never give up," he said.

He is now doing well in school and hopes to go to university.

"I hope to show everyone that NorthLight is not a school for failures, but a school of second chances," he said.