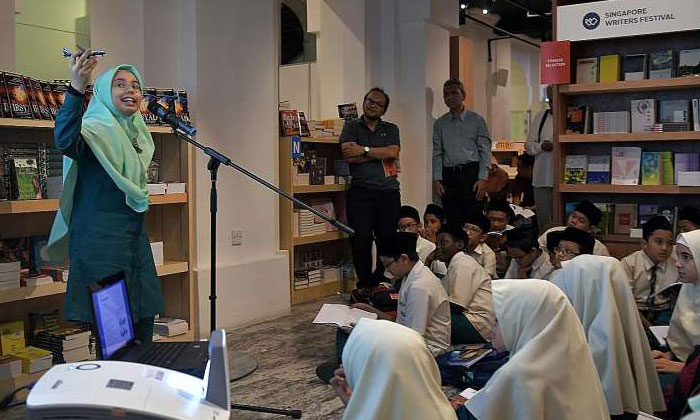 They may be young, but 37 pupils from Madrasah Irsyad Zuhri Al-Islamiah are now published authors of their own science fiction stories - from tales of magnetic-powered cars to a colour-changing chameleon man.

Titled The Scientific Tales Of Irsyad, this first book of English fiction by madrasah pupils was launched at the school on Saturday morning.

The project was initiated by the book's editor and publisher, Mr A. Rahman Basrun, founder of the publisher Scholastica and the vendor who conducts the madrasah's Golden Book Programme (GBP) from which the authors were selected.

Impressed by the talent of the pupils enrolled in the enrichment programme, which grooms higher-ability students in the academic subjects of maths, science and English, he invited the pupils to pen stories for the book - on condition that their works be based on science.

"If you talk about primary school pupils, they will usually write along the lines of composition story-writing - tales of them going to school or their experiences of society. I wanted to break away from that," said Mr Rahman, "I thought, 'Why not do something different to show that madrasah students can also write about science?' "

The young authors also became the first primary madrasah pupils to take part in a Singapore Writers Festival (SWF) event last Wednesday, where they read their works to an attentive audience at the SWF bookshop.

Close to 100 listeners were treated to the stories by the Primary 4 and 5 pupils.

Madrasah pupil Shaurah Shubail Ashiblie, 10, said she was ecstatic when she heard that her story would be published, and relished the privilege to speak at the SWF.

Her story, titled The One That Flies Better, is about two boys, Sam and John, who are competing with each other to make the best toy plane. "I thought that by writing this story, it will open people's hearts to build something, even if it is small," she said. "It felt amazing that I could finally deliver my story, especially during the writers festival and hopefully I inspired others to write, regardless of age."

The anthology can be purchased at the SWF bookstore for $15.

Madam Rosmawati Ahmad, 48, GBP Teacher Coordinator, said they hope to release a second book. "We plan to have a writing camp for the writers, and we will invite more students who are interested in writing and are able to write well."