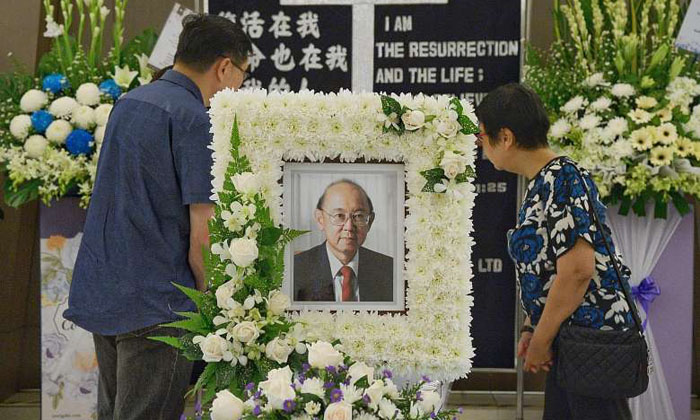 Singapore Polytechnic's longest-serving principal Khoo Kay Chai has died at the age of 80.

Former students and colleagues who attended his wake at Mount Vernon Sanctuary yesterday remembered him as a caring leader who continued to develop Singapore Polytechnic (SP), even long after he had stepped down.

"He would always make time to come back for our events," said Mr Bill Chang, 49, chief executive of Singtel Group Enterprise, who was an SP student from 1983 to 1985 and is now chairman of its board of governors. "He was always asking if we are doing enough for the students, even after he stopped being principal."

Businessman and Singapore Polytechnic Graduates' Guild president Jimmy Lim, 57, added: "He was like a father to all the alumni, and a wonderful, supportive friend."

Mr Lim noted that Dr Khoo, who died on Thursday, was crucial in reviving the polytechnic's alumni guild in the mid-1980s and developing its first clubhouse.

Dr Khoo served as principal of SP from 1976 to 1995. He supervised the campus' move from Prince Edward Road to its present Dover Road location. The move allowed the campus and enrolment to expand.

He also introduced advanced diploma courses, arranged degree transfers with the then University of Singapore in 1969 and set up a department of industry services to maintain links with the industry.

Mr Tan Peng Ann, 58, senior director (administration cluster) at SP, who worked with Dr Khoo in the 1980s and 1990s, said: "Even though he was your boss, he related to you more as a friend. He was open to listening to ideas.

"He saw the need for students to have pastoral care and to know that they have a mentor to talk to about relationship issues, adjustment, family problems, in an informal setting."

Dr Khoo also had the foresight to start overseas exchange stints for students in places like Japan in the 1980s, as well as provide career guidance, at a time when these initiatives were not common.

His wife Maggie said her husband had been suffering from kidney failure for many years.

"He was a quiet man of few words and would always give in to me," said Mrs Khoo, who is in her 70s. "Deep down, I know he really cared for me."