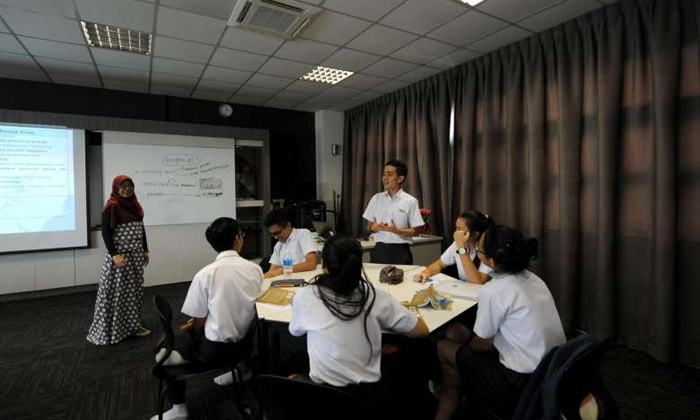 With English increasingly the main language used in homes here, the thought of burrowing deep into literary works in mother tongue languages may be daunting to most.

And more works by Singaporean authors have been included in the new syllabuses for language and literature in the Chinese, Malay or Tamil language at the A levels introduced two years ago, with the Ministry of Education (MOE) noting that students now get "good exposure" to these texts.

Madam A. Malika, 59, a Tamil language and literature teacher at Yishun Junior College, said Singaporean texts now account for about 50 per cent of the literature component of the Tamil Language and Literature syllabus. These include short stories by Naa Govindasamy and Rama Kannabiran. "It's quite a drastic change, as we did not have any local texts in the past. Students have given feedback that they can relate better to the texts, and they enjoy it more," she said.

From this year, students can use computers to type out responses to a section on commentary writing in the mother tongue language and literature A-level exams.

This is "in line with the greater use of infocomm technology in the teaching and learning of mother tongue languages", MOE said.

From 2010 to last year, the O-level cohort for Literature in Chinese as a full subject or elective was 400 strong on average, said MOE, with an average of 60 and 15 taking literature in Malay and Tamil respectively.

At the A levels, mother tongue literature is taught alongside the languages, with average yearly enrolment at 380, 130 and 50 for Chinese, Malay and Tamil respectively.

Dr Sa'eda Buang, a senior lecturer in the Asian languages and cultures academic group at the National Institute of Education (NIE), said enrolment is one of the main challenges in teaching literature in Malay, and new teaching strategies have been introduced to enhance its appeal.

"When we mention mother tongue literature or language, we don't want it to be archaic. Some schools have experiential learning programmes where they take students to Malaysia and Indonesia where they can better appreciate the plots and characters that they find in their texts, for example."

Events like BlackArena, a biennial cross-genre competition, also adopt an innovative approach by encouraging students to transform Malay literature texts from one genre into another, such as by dramatising poetry, she said.

At schools such as Bukit Panjang Government High School, which offers the Elective Programme in Malay Language for Secondary Schools, students attend language camps and creative-writing workshops. While Integrated Programme students do not take the O levels, schools like Dunman High School and River Valley High School also offer Literature in Chinese as part of their curriculum.

Mr Chow Teck Seng, a former NIE teaching fellow who is now a PhD student at the University of Cambridge researching comparative Sinophone literatures, said steps have been taken to make the Chinese literature syllabuses more accessible in recent years. While the learning of mother tongue could be difficult as more start to learn the language only in school, exposing pupils to the literary arts in these languages as early as primary school could help develop a love for the language and its literature, he said.

Academics also mooted the possibility of introducing ways of teaching mother tongue literature from a comparative perspective, with some texts read in translation.

"The thinking that you need to start from language to literature may not be the only path... There could also be inter-cultural approaches," said Mr Chow.

Said Dr Buang: "Literature reflects the challenges and issues faced by each community. In the end, you understand that every community is not so different from each other. We experience love, pain, and it's all part of the essence of being human."