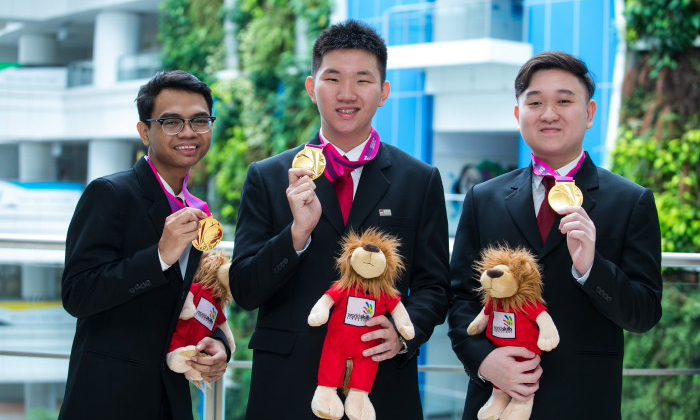 The results of the competition were announced at the Closing Ceremony on 15 July and officiated by Mr Ong Ye Kung, Acting Minister for Education (Higher Education and Skills).

After three days of intense competition, WorldSkills Singapore (WSS) 2016 came to a close on 9 July. A total of 150 young talents went through gruelling test projects and assignments, for the honour of being recognised as the best in their skills and trades.

ITE students have done their school very proud at this year's competition. Some of them even won ITE's first Gold Medalin some skill areas. I am attaching some photos of ITE's Gold Medal Winners and WSS 2016 Closing Ceremony.

On Friday 15 July, at 2.30 pm, Mr Ong Ye Kung, Acting Minister for Education (Higher Education and Skills), officiated at WSS 2016 Closing Ceremony at ITE and presented Gold, Silver and Bronze Medals to winners, together with Cash Awards of $3,000, $2,000 and $1,000 respectively. Top Medallists from 17 skill areas (of which two are team events) will stand a chance to represent Singapore at the 44th WorldSkills Competition (WSC) in Abu Dhabi, United Arab Emirates, in October 2017.

Mr Ong Ye Kung, Acting Minister for Education (Higher Education and Skills) said, “The participants of the WorldSkills Singapore 2016 have what it takes to be masters of their chosen fields – because they are committed and passionate to their craft, proud to be so, and eager to continue to learn and hone their skills.

"It is important that society starts to give more recognition to such talents.  Next year, the best amongst them will be participating in the WorldSkills Competition in Abu Dhabi.  This is the World Cup of skills competition, and I would like to be there to cheer them on.”

"The Winners of WorldSkills Singapore have demonstrated resilience and perseverance to be young role models in their skill areas.

"I am confident that the new Team Singapore will do us proud at the next WorldSkills Competition in Abu Dhabi in 2017. With the will to be master of their skills, they have a bright future."