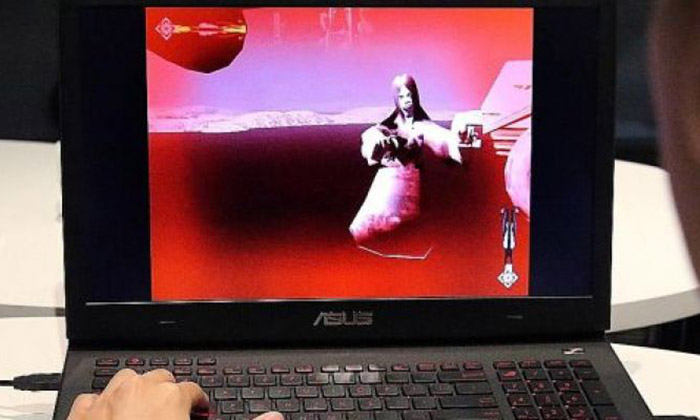 Your sense of smell could mean life or death in this horror adventure computer game developed by Institute of Technical Education (ITE) students.

Scents released help you progress while playing the game.

And if you smell bananas, beware, because it means death is just around the corner.

Tainted is a computer game based on the Malay folklore of the pontianak ghost designed by 15 final-year students from ITE College Central's Higher National ITE Certificate programme in Games Design and Development for their final-year project.

They collaborated with researchers from the Keio-NUS CUTE (Connective Ubiquitous Technology for Embodiments) Center, who developed the smell-emitting modules.

The game features four scents - banana, jasmine, pineapple and mango - which, paired with colours, serve as indicators of the game's progress.

Gameplay is about three minutes long, and it ends when the player is caught by the pontianak.

Tainted will be featured this week at the Indie Game Area of the Tokyo Game Show (TGS), which attracts more than 200,000 visitors each year and showcases exhibitors such as SEGA Games and Konami.

It was selected as one of the eight finalists for the TGS Sense of Wonder Night for its unique use of smell-emitting modules to enhance the gaming experience.

Gaming technology has made leaps and bounds in recent years with virtual reality consoles such as the Oculus Rift providing a realistic and immersive gaming environment.

While there have been earlier attempts at incorporating smells into a game, such as the FeelReal add-on for the Oculus Rift, using a gamer's sense of smell to help progression in a game is still a foreign concept to most developers.

One of the ITE students involved was Mr Benjamin Lim, 21, who graduated in February. Mr Lim, who is now pursuing a Diploma in Animation from Nanyang Polytechnic, was the one who came up with the idea of using the pontianak folklore for Tainted's story line.

He told The New Paper: "We chose horror as our genre because we thought it was the best way to use the modules, using scents to create suspense."

He said when the character is near an item that is useful to the game's progression, the modules, which are fixed with coloured LED lights, will light up and a specific scent will be released into the air.

For example, red lights and a banana scent means the pontianak is nearby. Mr Raymond Koh, a lecturer at ITE College Central's School of Electronics and Info-Comm Technology, told TNP: "It was a challenge for the students because it's quite an abstract concept to use smells in a game, and they had nothing to refer to.

"We're always interested in pursuing new avenues to showcase our work and ideas, and the Tokyo Game Show is one of the biggest gatherings for game developers."

Another student, Mr Nikki Danish Putra, 19, added they had to go through countless rounds of trial-and-error before the game was ready.

But the six months of hard work, and staying in school for up to 10 hours daily turned out to be fruitful for the students when they found out Mr Koh had submitted Tainted to be exhibited at TGS and it was accepted.

Mr Lim said: "I was speechless when I heard the news, and I'm really pleased that our hard work is paying off even after we graduated."