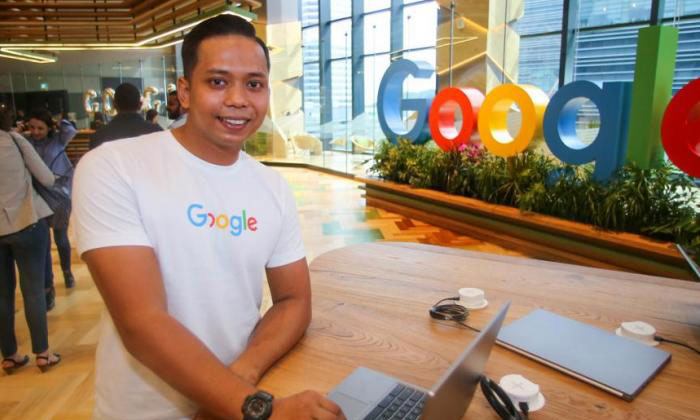 When he was 15, he built his own computer from parts bought at Sim Lim Square.

To fund his endeavour, then secondary school student Muhammad Haikal Fadly Mohamed Ariffin took up a part-time job at a fast food outlet and saved every cent he could.

Today, Mr Haikal, 26, works as an operations assembler at tech giant Google, where he helps keep servers up and running at its Singapore data centre in Jurong.

The data centre hosts servers, networks and routers that allow consumers to use Google products like Gmail, Google Chrome, Search and YouTube.

Recounting his first self-built computer, Mr Haikal said: "It looked funny, but I did it with my own hands, so sometimes things didn't go so well.

"I liked to play around with technology and even built a computer for my brother."

In 2011, Mr Haikal graduated from the Institute of Technical Education (ITE) with a diploma in technical engineering in machine technology and went on to complete his national service.

Three years ago, he landed a job at Google, a company consistently ranked as one of the top employers and workplaces in the world.

"Never in my wildest dreams would I imagine I would be working for Google. I applied because I wanted to try to dream big and maybe do something great in the future," he said.

Mr Haikal, who got married last Friday, said friends and family were excited and surprised when he landed the job.

"I guess it's a normal reaction for most, but my mother and my wife are really proud of me."

With support from his company, the Googler - a nickname for Google employees - is pursuing further studies in information technology at private institution Kaplan University.

Mr Haikal starts work at around 9am, but he said the hours are flexible as long as tasks are completed on time.

Most of his work involves repairing and maintaining Google servers which operate 24/7.

Mr Haikal and his colleagues routinely take time to chill over a game of table tennis, and spend time discussing new ways to innovate and improve everyday tasks.

They also give back to the community through regular outreach to schools near their workplace by teaching students coding and taking them on "virtual field trips" with tools like Google Cardboard.

Mr Haikal said Google does not look for smart people only, it looks for creative problem-solvers who look at problems from a different perspective.

"They don't want people who are textbook problem-solvers.

"You'll be facing a lot of problems and decisions at work, and you need the confidence to speak up, share ideas and take initiative," he said.

"It doesn't matter your job role, level in company, or even how long you've been working here, as long as you want to contribute ideas and solve problems."

He said: "It's because of the people and the community here.

"Every day you come and you have a mission to either solve someone's problem, improve someone's day or change the world."