It runs in the family! Baby born with adorable streak of white hair carries on family tradition 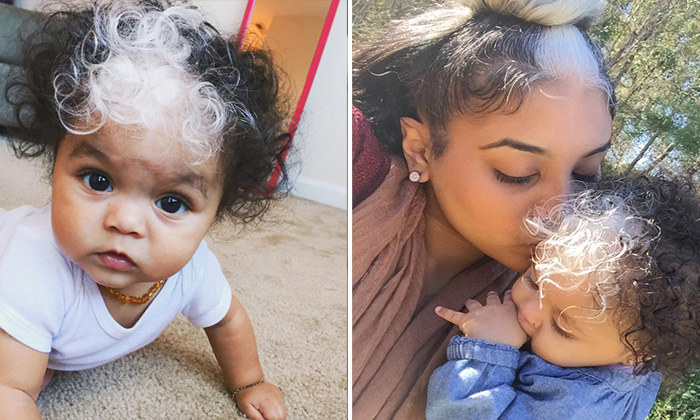 Like Anna from Disney's celebrated film 'Frozen' who had a striking platinum blonde hair streak, MilliAnna is a baby born with a wild streak of white hair.

The infant is the fourth generation of women in her family to be born with poliosis.

The condition causes a lack of pigmentation in a patch of skin or hair.

The unique birthmark has left her with a tuft of white hair in a sea of black, just like her mother, grandmother, and great-grandmother.

According to Distractify, MilliAnna's mother, Brianna Worth, talked about facing difficulties as a kid because of her unusual streak of white hair.

"In elementary school, kids are a little harsher, but when you grow up, it becomes cool.

"I am going to tell her (MilliAnna), 'You are unique, you are pretty, you are beautiful."

Brianna also mentioned that while she was expecting with MilliAnna, she was hoping her daughter would carry on the family tradition of white hair.

"I was hoping she did have it.

"My younger sister that my mother had a few years after me didn't get it, so I did not know if MilliAnna was going to, but once I had her and they laid her on my chest and I saw she had it I was so happy."

"We definitely get stopped a lot while out and about on our daily routines," she said.