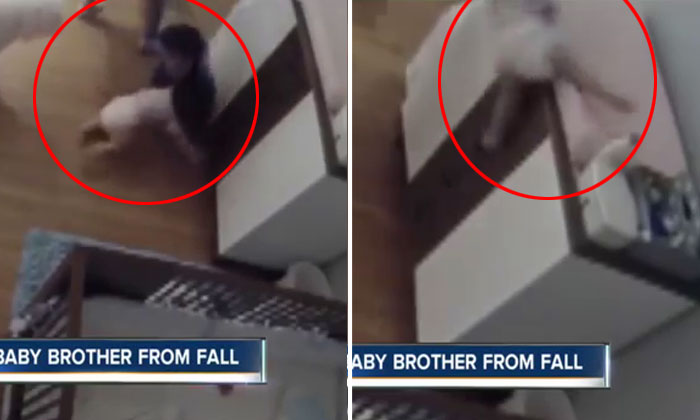 Parenting is not as easy as it seems to be, especially when it involves an infant. With babies being entirely helpless, every second of a parent's day just has to be dedicated to ensuring its safety -- this means turning one's back for a even minute can be highly dangerous.

But what happens when parents are not around? This is where siblings step-in to save the day.

And that's exactly what nine-year-old Joseph Levi from Bal Harbour did -- but he certainly did not expect to achieve overnight fame for saving his infant brother from a four-foot fall off a changing table.

According to Distractify, Tila Levi, the boys' mother, turned her back for a moment when 11-month-old Eitan tumbled off the edge of the changing table. Thankfully, Joseph, dashed over and caught his brother just in time.

In fact, the nine-year-old is also unfamiliar with how his heroic deed "happened".

"I felt like something came and just pushed me forward, and then when it happened, I just ran and caught him," he told WSVN. "I would never be able to do that again because I can't carry my brother."

Brotherly instincts -- we think so too!

At first, the boys' mother was hesitant to post the video, as she was afraid it would portray her in a negative light, but she decided to post the video after all the Election Day negativity on Facebook, in hopes of "chang[ing] the tone of the day," she told KABC.

And Levi says she's learned from the experience just how quickly our lives can change:"I am more careful, but at the end of the day, it could happen in a second."

Related Stories
Bravo! Hindu devotees save pedestrian's life by performing CPR after he collapsed at Serangoon Road
S'porean man dies trying to save daughter at JB waterfall: 'He was a great dad'
S'pore doctor gives up 5-figure salary to save street dogs
cool
youths
amazing
cute
baby
teenager
save a life
heartwarming
brother