Help from a stranger turns her life around: she is now gunning for a degree 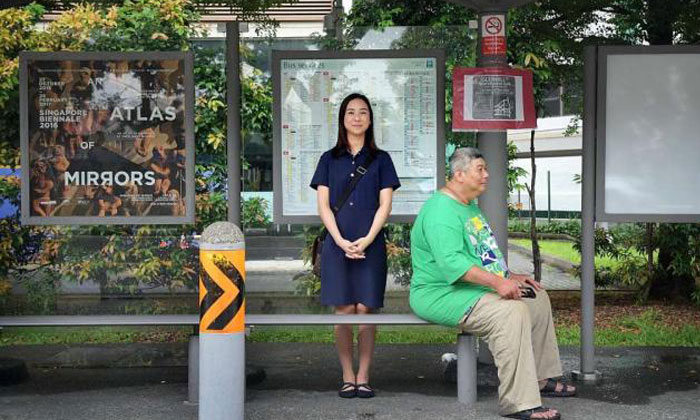 Things were looking bleak but a chance meeting with a stranger helped Ms Jaycie Tay, who was twice incarcerated and dropped out of school, defy the odds to achieve a diploma. And the 32- year-old twice-divorced mother of four is now gunning for a degree, as well as a brighter future.

It was late 2013 and Ms Tay had attended a course funded by the Government and a halfway house earlier in the day. She was training to be a florist.

Ms Tay, who was on the last leg of her 18-month sentence for drug offences, was waiting for a bus in Yishun to return to halfway house The Turning Point when she met Mr John Shu, a now 50-year-old mechanic. He had to take a bus that day as his motorcycle was in the workshop. The pair started talking and soon struck up a friendship.

She began to confide in Mr Shu, who is married with a 22-year-old daughter in polytechnic and a 19-year-old son working as a chef.

She shared her life story and her desire to pursue a diploma to give her children a better future. She had worked as a waitress and a retail assistant, among other jobs, but they paid less than $2,000 a month.

She said her parents, who are divorced, were not supportive of her plans to upgrade herself. And she did not have the $5,000 needed for the course fees.

Besides, she was getting treatment for depression then and the people around her felt she could not cope with handling a messy divorce, caring for her children and going back to school all at once.

Mr Shu said: "Her wish to get an education is a good thing. And since her family is not supporting her and no one supports her, I thought I would support her and give her a way out."

Mr Shu, who earns just over $2,000 a month, gave her about $6,000 to pay for her diploma and other expenses. This was a few months into their friendship. He said he and his wife, who works as a hawker, can get by on their income.

Ms Tay began her studies shortly after her release in 2014 and graduated with a diploma in marketing management from Kaplan Higher Education Institute eight months later.

Hitting the books was a huge change for a girl who was introduced to drugs by her friends as a teenager. She was only 18 when she was jailed for one year for drug offences. When she became a mother at the age of 20, she quit drugs.

But she returned to drugs to escape from her woes when her first marriage broke down. She has two children from that union, a 12-year-old daughter and a 10-year-old son. Her first husband has custody of them.

Her second husband was also a drug abuser and they were arrested at the same time for drug offences.

About four years ago, the couple was jailed and their daughter, only a baby at the time, was left in the care of her in-laws. The girl is now five.

Ms Tay's second sentence, served at the Drug Rehabilitation Centre at Changi Women's Prison, "shook" her up. "I saw how the other drug addicts ended up with nothing. Their children did not want them; they had no house and no money. I did not want to be like them."

Behind bars, an inmate encouraged her to further her studies. And with Mr Shu's help, she became a diploma holder.

His help did not end there. While studying for her diploma, she found herself unexpectedly pregnant with her fourth child - with her second husband. Their marriage was on the rocks. She wanted a divorce and was worried about her finances.

Mr Shu said: "I encouraged her not to abort as the baby is innocent. I told her that if she can't afford to raise the child, I will help her. I will help her all the way."

Ms Tay said Mr Shu paid for her visits to the gynaecologist and even cooked for her when she was recuperating from the childbirth during her confinement month.

"He never asked for his money back or for anything in return," she said. "Others have made unpleasant remarks (implying we are having an affair) but we are clean."

Ms Tay, who is working as an administrative assistant, said she has offered to repay part of the sums that he gave her, but he has declined. She declined to reveal her pay.

"He has helped many people, not only me... Some (of his friends) have taken advantage of him."

Mr Shu, a primary school graduate, said in a mix of Mandarin and Hokkien: "Why should I calculate so much about helping others? I already have one foot in the grave and if I need help in the future, others would help me."

He said he is just glad that she managed to get her life back on track, adding: "I see Jaycie as a family member, like my younger sister."

Last month, Ms Tay started a part- time course - Bachelor of Business Studies in Management - at Kaplan. The degree is awarded by University College Dublin. She won a bursary from the Yellow Ribbon Fund Star Bursary to pursue the degree. She said the fees cost over $20,000.

"I never thought a stranger (who became a friend) would help me so much. I hope that by sharing my story, other former offenders can also feel there is hope in life," she said.

The Yellow Ribbon Fund Star (Skills Training Assistance to Re-start) Bursary was launched in 2010 to assist financially needy former offenders in vocational and skills training, to help them find jobs.

The bursary covers up to 100 per cent of the course fees for diploma and degree programmes.

Since it was launched, 128 students have been on the bursary scheme and 52 have graduated.

The graduates include one who earned a diploma in banking and finance services from Nanyang Polytechnic and another who attained a diploma in culinary skills from Shatec.

The bursary is open to all former offenders who have been accepted by any educational institution in Singapore. It is disbursed by the Yellow Ribbon Fund, a charitable fund that helps offenders and their families.