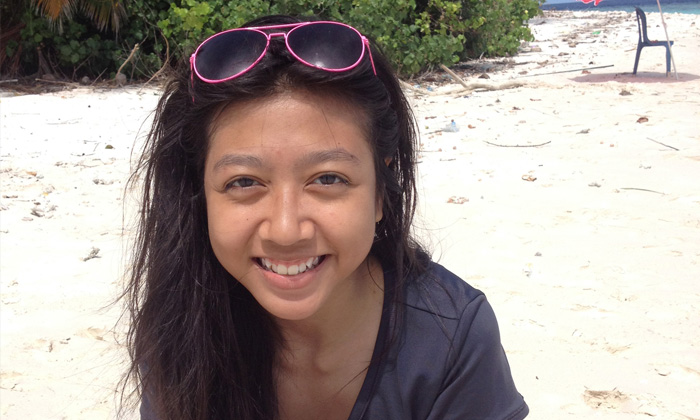 Spending two months in the Maldives is a getaway most people just dream about.

But for one lucky graduate from Temasek Polytechnic (TP), that dream became a reality.

The 22-year-old worked at the resort's Marine Discovery Centre for two months as part of her diploma's Overseas Student Internship Programme.

"It's been three years and I still have dreams about living in the Maldives," she told The New Paper in a phone interview from Gatton, Australia, where she is pursuing a degree in Veterinary Technology at the University of Queensland.

During her internship, Miss Shabrina looked after sea turtles.

Five weeks in, she was allowed to care for a green sea turtle until its release into the ocean.

She also helped to breed seahorses and Maldivian clownfishes in a laboratory.

Yesterday, TP unveiled its Centre for Aquaculture & Veterinary Science, which includes an Aquaculture Research Facility - something Miss Shabrina wished she had access to when she was a student.

She said: "I could have made suggestions during my internship and helped out more in the lab. But I think the new facilities will help expand students' perspectives and let them try something new."

Mr Kenneth Chin, a fellow Vet Tech graduate, also wished that he had access to TP's new facilities when he was a student.

Despite a hearing disability that requires him to use cochlear implants, the 20-year-old secured a four-month internship at Resorts World Sentosa's S.E.A Aquarium last year before joining it fulltime after graduating in May.

Mr Chin helped care for the animals, including feeding and health monitoring, something he has always been passionate about.

He said of TP's new facilities: "I would have learnt so much more about aquatic life and widened my scope of experience with many more species."

Mr Akira Yeo, the curator at the S.E.A Aquarium who gave him both the internship and the job said: "I know I can provide him with an opportunity that allows him to shine in areas where his fish-keeping passion and photography interest lie. And we have succeeded together."

The centre, the first of its kind in Singapore, is home to an aquaculture research facility (ARF), the TP Animal Clinic and Animal Wellness Facility, and laboratories dedicated to disease research and prevention.

The ARF will work closely with relevant organisations in the local aquaculture industry to raise production levels through innovative technology.

The Animal Clinic and Animal Wellness Facility will provide a range of pet care services, such as surgery, treatment and grooming.

The facilities will be fully operational by early next year.

"We hope the facilities will be able to help students enhance their learning," said Dr Diana Chan, course manager for the Diploma in Veterinary Technology.