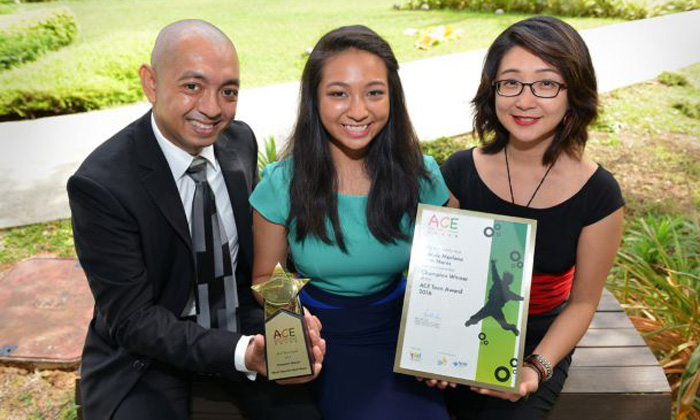 When she was in primary school, she regularly went home with bad grades, no matter how hard she tried.

Words and letters "shook like crazy" to her and she had difficulty copying things off the board as she could not focus.

Said Nicole Marlene Ruth Nonis, 16: "I thought I was stupid and dumb and that I was just not as good as my friends. I had horrible confidence and my morale was really low."

It took her years to accept her conditions and to overcome them to excel in her studies - an achievement that made her the champion winner of the Ace Teen Award last Thursday.

The Ace awards are given to children and teens with ADHD, and to coaches and mentors who have made a difference to their students.

To Nicole, the award is an affirmation of how far she has come since her diagnosis in Primary 3.

"Then, I didn't really understand... I just thought, this is me. It's just a label," said the Secondary 5 student at Northbrooks Secondary.

As she learnt more about her condition, she became aware of how different she was from her peers.

"I realised I didn't fit in. I was trying my best to (fit in)... I felt that (telling people about my ADHD) would create barriers. I just wasn't open about it," she said, adding that she cried every day.

She discovered she had dyslexia in secondary school and learnt to cope with it, sometimes even by joking about it. It helped that her friends did not see her differently.

Today, she is vice-chairman of her class. She is also active in community work and has a passion for drama and children.

Nicole's achievements are a sign of how she has blossomed, said her mother Valerie Nonis, 42.

Mrs Nonis, a secretary at an international school, said she realised something was up when her daughter came home with results that did not match the amount of work she had put in.

"The Internet was my best friend at that time because I started doing a lot of research... In those days, (ADHD) wasn't very well known," she said.

"It made me re-examine what's essential... At the end of the day, it's this child (who is important).

"It's not so much about academics... (It's about) whether she made that effort, if she is happy, and if she feels her efforts did not go to waste.

"And I realised, different is good," she added with a smile.

Dr Ong Say How, chief and senior consultant of the Institute of Mental Health's child and adolescent psychiatry department, sheds light on the most common mental health condition among children in Singapore.

ADHD is a neuro-developmental disorder characterised by serious and persistent difficulty in three areas: inattention, impulsivity and hyperactivity. It affects three to five per cent of school-going children. In a class of 40, there will be one or two students with ADHD.

WHAT ARE THE SYMPTOMS?

For someone to be diagnosed as having ADHD, the symptoms must have started before the age of 12 and be evident for at least six months. Symptoms include fidgeting or squirming often while seated and failing to give close attention to details.

HOW CAN IT BE TREATED?

There is medicine available that changes the brain chemistry so that the brain may function in a more orderly manner. But not all patients require medication. Symptoms can also be managed by changing the environment.

Average number of new ADHD cases seen at IMH's Child Guidance Clinics every year from 2012 to 2015:645