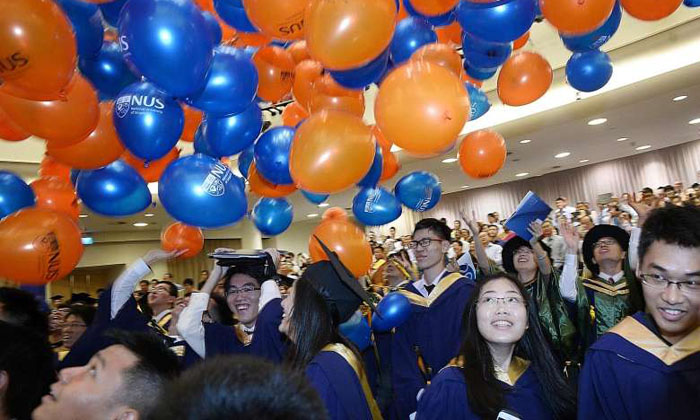 The National University of Singapore (NUS) has kept the top spot in an annual ranking of Asian universities, while Nanyang Technological University (NTU) moved up one place to third.

London-based education and career consultancy Quacquarelli Symonds (QS), which is releasing its rankings this morning, has expanded the top Asian universities list to include the region's 350 best universities, 50 more than in the previous year.

QS has also added another metric - staff with a PhD - in order to add another dimension to its analyses of teaching quality.

NTU also achieved a perfect score in four metrics: employer reputation; citations per paper; international faculty; and the proportion of outbound exchange students, which is used to assess a university's success in forging international partnerships with universities worldwide.

He added: "At NUS, our priority is in preparing future-ready graduates and developing top talent, driving innovation and forging strategic collaborations with academic and industry partners, and delivering impact from world-class research."

NTU president Bertil Andersson noted that NTU, despite strong competition from older and more established universities, stands out as No. 1 in Asia for citations per paper.

"This good result is further proof that NTU's investments in research have paid off," he said.

Asked to comment on SMU's debut in the rankings, QS said it included the 16-year-old institution this year as it now offers degrees in information systems and social sciences.

It called SMU's 60th placing a "great achievement" as it is not a comprehensive university.

It added that SMU ranks 25th regionally for citations per paper and had perfect scores for two indicators of internationalisation: international faculty and outbound exchange students.

SMU provost Lily Kong said the university "is highly committed to delivering high-quality teaching and research, for which ranking is only one possible - if imperfect - indicator".

The Hong Kong University of Science and Technology was placed fourth.