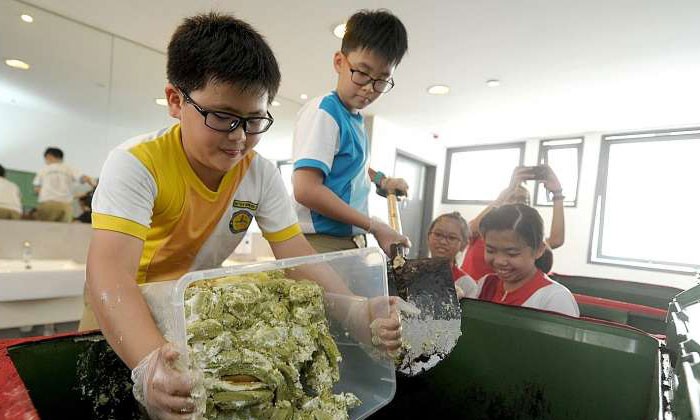 Since August, Yu Neng Primary School pupil Darran Ng, 11, and his schoolmates have been visiting the BreadTalk headquarters in Paya Lebar every other week to get their hands dirty.

The 40 pupils from the school's science club are on a mission to help save the environment - by turning leftover cakes into nutrient-rich compost.

They do it via aerobic composting, which breaks down organic matter with naturally occurring micro-organisms that require oxygen.

The pilot project is part of a food waste composting initiative by the school, OCBC Bank and BreadTalk, which aims to promote a culture of environmental sustainability among the young.

The aerobic composting method is used as each cycle can be done within three to four weeks and it produces less odour than anaerobic composting, where organic matter is broken down with micro-organisms that do not require oxygen to survive.

Each day, 30kg of leftover cake trimmings from the BreadTalk central kitchen in Paya Lebar are collected for the programme, which comprises six sessions. It began in August and will end next month.

During a visit, the pupils place the cake trimmings between layers of potting soil in a large bin. They then spray the layers with a solution of microbes purchased from a local company selling organic products for composting purposes.

The mixture is left in the covered bin for a few weeks. Oxygen, which helps in the decomposition process, is delivered into the bin through aerator tubes.

The cake trimmings will decompose and then become compost, which is then collected and packed into packets by the pupils and 160 staff volunteers from OCBC and BreadTalk.

The participants aim to collect 1,200kg of compost over the programme's six sessions. Half of it will be given out free to the gardening community during the monthly Gardeners' Day Out at HortPark this Saturday.

OCBC will sell the rest of the compost to its staff to raise funds for the bank's selected charities.

The three bins in the composting project - each set-up costs less than $1,000 - and the packing materials are sponsored by OCBC.

She added that the pupils are able to apply their academic understanding of a scientific process within a commercial environment, while "our friends at BreadTalk can contribute to a meaningful cause".

The pupils also run a project called Clean Plate, where they turn waste food in the school into compost .

Ms Joanne Wong, senior brand manager at BreadTalk's bakery division, emphasised the importance of engaging with the pupils and "extending their science project outside of the classroom".

Said Ms Wong, 36, who is also one of the volunteers in the pilot programme: "Environmental issues are rising globally and these children are going to be future leaders. It's important for them to know that they need to take care of the environment that they live in."

For Darran, the Yu Neng Primary 5 pupil involved in the project, his favourite part of the process is using a shovel to spread the potting soil and food waste.

"Creating compost from food waste can save the environment, and we should contribute whatever we can," he said.

Related Stories
Sharity Elephant makes a comeback to encourage students to do good
12-year-old wins the hearts of netizens after helping accident victims at Yishun Ave 2 -- while adults simply take pictures
Tourist raves about how wonderful Singapore is -- and one gentleman proves her right with his kind acts
More About:
youth
students
nature
school
food
NParks
charity