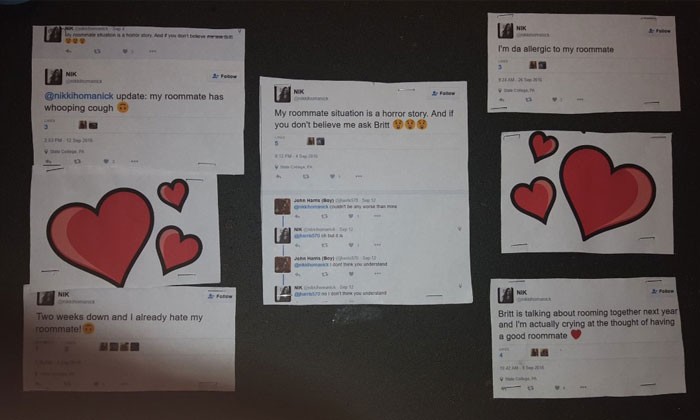 Roommates, you either love them or hate them. But what happens when you find out that your roommate has been complaining about you on Twitter all this while?

This is what you should do.

In the case of a pair of roommates at Penn State via Distractify, Jessy Jeanie was the victim. A smart one.

Jessy found the tweets by her roommate and decided to print all of them and ‘decorated’ the entire room with it.

Unhappy with Jessy’s tweets going viral, her roommate privatised her account, and then tore up the print-outs all over the room. As if that was not petty enough, she even called the cops and tell them that Jessy had weed.

Jessy later shared the conversations she had with her roommate while all this was going on.

Related Stories
Will you do this for your friend?
Malaysian woman bites 1cm of husband's finger because he came home late -- and swallows it
5th grader throws shade at boy who had a crush on her through hilarious warning note
More About:
online
funny
youth
student
school
viral
twitter