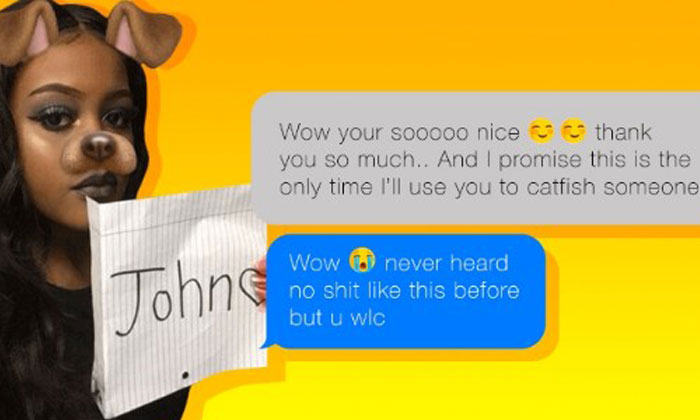 Cat-fishing was all the rage a year ago... and no doubt there is some stigma attached to it.

However, it seems like it is not always a bad thing, especially if you even make the effort to contact the person you are pretending to be in hopes to get semester's worth of free textbooks.

Would you help a person if someone came up to you like that?

According to Distractify, a girl called Shania was minding her own business when she received this request from a complete stranger in a private Facebook message.

So this person messaged me on Facebook... this happened pic.twitter.com/YfhQVX8tbU

While most people would have instantly shot down this incredibly odd request in a heartbeat, Shania, decided to help.

As seen from the images, the stranger promised that she would not use Shania's pictures to catfish anyone ever again (wow) and even thanked her for going the extra mile to help sell her as the real thing to the much older unwitting donor.

And of course, people reacted accordingly to her decision to help what was essentially a scammer get free books.

Said one netizen: "I don't know if this a good or a bad thing are they really getting textbook or did the person she was catfishing sent her money."

Said another: "I would've went off."

After discussion broke out on how the person would be receiving the books, Shania responded with the answer she received.

@Ainahss for everyone who's asking she said he gave her $1000

And after seeing her go through all that trouble, one user had her interests in mind.

@Ainahss girl ask for your cut

What do you think of this situation? Would you have helped this stranger?