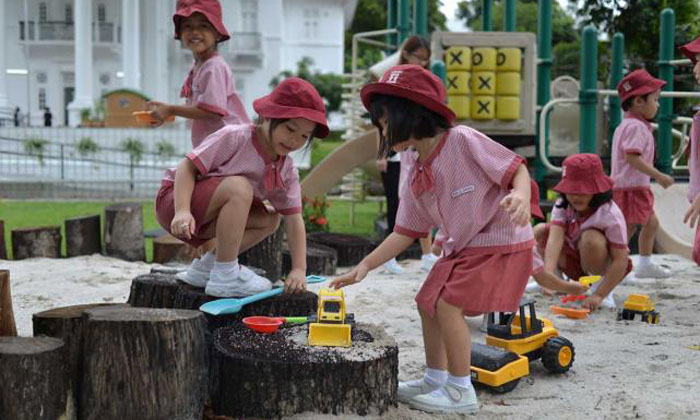 Kindergarten enrolment is on the wane as more parents head back to work and need their children to be taken care of for longer hours, prompting some pre-school operators to switch to childcare.

Over the past three years, there has been a dip in the number of kindergartens, from around 500 to about 480. Kindergarten enrolment has also dropped by close to 6 per cent, from about 68,000 in 2013 to around 64,000 as of the second quarter of this year, according to Early Childhood Development Agency (ECDA) figures.

While childcare centres provide full-day and half-day care programmes to children below the age of seven, in addition to education programmes, kindergarten programmes usually last just three to four hours a day. "We expect the balance to continue shifting towards childcare, as this is the area of growing demand and needs," said a spokesman for the PAP Community Foundation (PCF), the largest pre-school operator here.

In an article published in the PAP's Petir Magazine in February, PCF executive committee chairman Josephine Teo said that one of its key programmes is to "accelerate the conversion of kindergartens to childcare centres offering full-day care services".

Over the past 18 months, the anchor operator has converted 24 kindergartens into childcare centres, in addition to building 13 new ones. Childcare now takes up 34 per cent of its enrolment in its 378 PCF centres, compared with 25 per cent two years ago.

The ECDA said that about one in 10 of the more than 30,000 childcare places that have been added over the past three years can be attributed to kindergartens which have been converted into childcare centres. Since 2013, the agency has also been offering a grant - the Kindergarten Conversion Grant - for operators to convert kindergartens with low enrolment, among other criteria, into childcare centres in areas with high demand. Three have been awarded the grant so far.

A Young Women's Christian Association of Singapore spokesman said it closed its only kindergarten last year due to low enrolment. Enrolment figures in its 10 existing childcare centres have remained stable.

"Parents may be drawn to childcare services because they can usually get a subsidy, while they might not be eligible if they opt for a kindergarten. But kindergartens and childcare centres serve different needs," she said.

All parents with Singaporean children can receive subsidies for ECDA-licensed childcare centres, while kindergarten subsidies are given only to parents who meet certain criteria, including having a gross monthly household income of $6,000 or below.

Dr Jacqueline Chung, senior principal at St James' Church Kindergarten, said even though St James bucks the trend of declining enrolment, it is considering opening a childcare centre after multiple requests from parents. Fifteen per cent of its withdrawals are due to families requiring childcare services.

Said freelance nutritionist Sherlyn Wong, 41, who has a son, three: "My schedule is quite erratic, so placing my child in childcare gives me peace of mind."

Related Stories
3,680 students secure polytechnic places based on their aptitude and interests
Plucky 11-year-old boy who lost both legs in accident overcomes all obstacles to climb mountains in China
Effective ways to help children revise for exams
More About:
student
child
youths
school