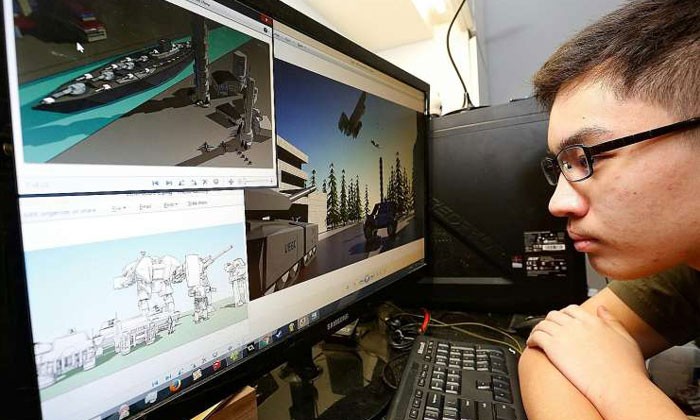 Intricately designed skyscrapers, aircraft and tanks fill a scene that looks like it was taken straight out of a video game.

But the scene does not belong in one of the newest games in the market, nor is it from the brain of a professional. It is the work of a 16-year-old who dreams of becoming a game designer.

Joshua, a Secondary 4 student, was one of about 3,680 secondary school students who have been offered a conditional place in a polytechnic through the Early Admissions Exercise (EAE).

The offers were made at the end of the exercise introduced this year to allow students to secure places in diploma courses through course-specific talents and interests, rather than only academic grades.

In Joshua's case, his skill in 3D modelling and animation got him a spot in Ngee Ann Polytechnic's diploma in animation and 3D arts.

Although he picked up 3D animation only in secondary school, Joshua's hands were always itching to create things from a young age.

"I remember messing around with origami as far back as kindergarten," he said.

In Farrer Park Primary School, he was constructing toy guns with rubber bands and vehicle models with scraps of paper.

By the time he entered Balestier Hill Secondary School, he was building cities in the popular video game Minecraft. He got the hang of his first 3D modelling software, SketchUp, during his design and technology class in Secondary 2.

His fascination with the software led him to continue using it to create his own 3D models as a hobby.

"SketchUp was a way to materialise the ideas inside my head," said Joshua, adding that it gave him the ability to express his imagination in a way that he could not before.

His skill was not easily achieved without hard work.

Starting with simple models that took an hour to complete, he moved on to bigger and more challenging projects such as designing a single 3D battleship, which can take up to six hours.

While the process may be tedious, Joshua enjoys it for the state of intense concentration it puts him in.

"I don't have a lot of concentration in other things, but 3D modelling helps me to focus my attention on something," he said. "When I finally finish a design and it looks nice, I get a sense of satisfaction."

Mr Philip Mitchell, senior manager at Ngee Ann Polytechnic's School of InfoComm Technology who met Joshua during the EAE interview, said his passion shone through in the amount of time and effort he put into his works.

"He's not just a guy sitting in his bedroom building stuff on his computer; he is very motivated and able to self-learn," said Mr Mitchell.

Joshua's designs, centred on battleships, weapons and other machinery, reflect where he gets his inspiration from - namely sci-fi movies and games, such as Star Wars and Halo.

Another source of inspiration is his mother, civil servant Karen Lim, 45, whom he turns to for assurance that his work is nice, or criticism when it needs tweaking.

"Her moral support is a large factor, and if she wasn't there, I wouldn't be doing (3D modelling) as much and wouldn't have that much motivation," said Joshua.

Entering polytechnic through the EAE route has been a positive move.

Going through the normal route "could probably land me a place in the animation course, but my grades now aren't fantastic and it would be stressful", he said.