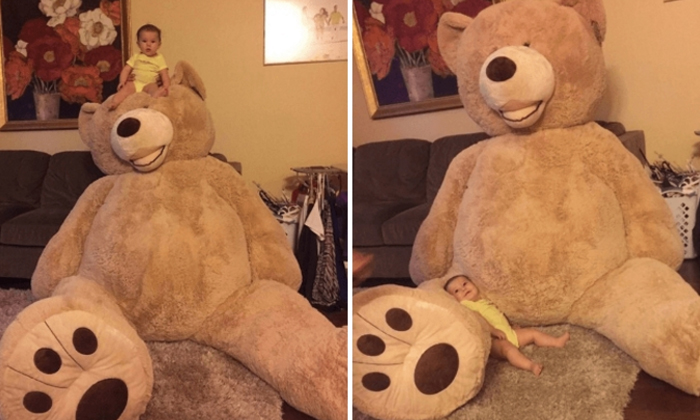 It is practically an unspoken law that grandparents are supposed to spoil their grandchildren, and this grandfather is no exception.

According to Distractify, Sabrina Gonzalez's father who works at Costco, an American warehouse, posted a photo to Facebook of himself with a shipment of hilariously gigantic Costco teddy bears.

Sabrina then joked that her 5-month-old baby Madeline needed one of the bears.

"Next thing I know, I receive a text from him saying he bought her one," said Sabrina.

Well, you have got to admit that the photos of him attempting to transport the huge bear (through Costco and to his truck) are pretty priceless.

Sabrina eventually took to Twitter to share pictures of her baby and the giant teddy bear, and her tweet has since gone viral with over 48,000 retweets and 71,000 likes.

Related Stories
Devoted daughter carries paralysed dad out for walks on the street thrice a day
Dad boosts daughter's self esteem by trying her gymnastic moves
Groom is about to say 'I do', but then he turns to face his stepdaughter...
grandfather
love
family
sweet
adorable