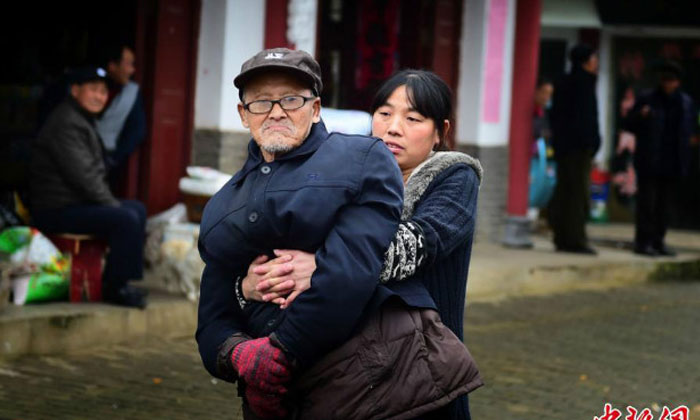 This 43-year-old woman in Anhui province has now become source of inspiration for many around China after images of her taking care of her paralyzed father went viral online over the weekend.

However, not wanting to see her dad just lie in bed all the time, Lu takes him out for walks each day by wrapping her arms around the old man.

Every day, the two take their time to walk along Liangming Road in Hefei city, completing the 300-meter journey in over an hour -- and according to Sohu News, the duo does this three times a day.

Her father, Lu Zaifa, has four children but lives with his youngest daughter, Qinxia, and her family. However, Qinxia's family is far from wealthy.

Both her and her husband work very hard  to support their two school-aged children.

However, upon learning about her father's stroke earlier this April, Lu decided to quit her job immediately to take care of him full-time.

Qinxia takes her dad out for walks, feed him, showers him, gives him massages and changes his diapers on a daily basis. And all of these tasks leaves the mother with barely enough time to care for her own kids.

Dubbed as "China's good daughter", Qinxia was surprised to learn that she became a hero online for her strong sense of filial piety.

In response, she told reporters that her parents devoted their entire lives to raising her and her siblings, so now it's her turn to take care of them.

Here's what a neighbor said about Qinxia: "She wraps her dad in her arms to walk and doesn't skip a single day. We men can barely do as well as she does."