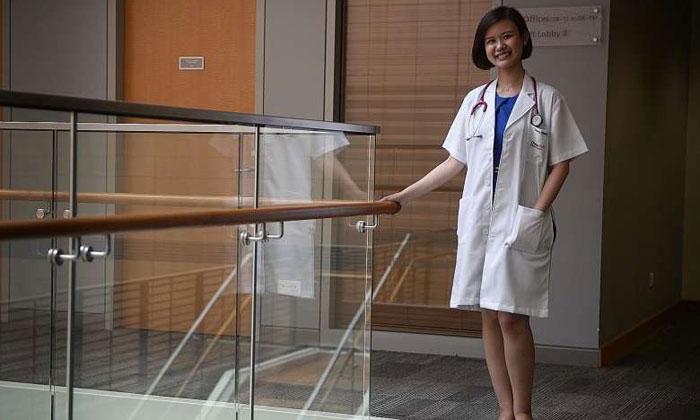 She was on her way back from work when she received a call from her father, who was home alone.

He was gasping for breath.

When she reached home, Ms Zhang saw the 62-year-old retiree sitting on a chair in their living room, looking weary. His skin was turning pale.

He had been making many trips to the toilet to throw up, despite hardly eating or drinking anything over the past three days.

Ms Zhang rushed her father to the hospital's accident and emergency department.

Scans revealed that his oesophagus, the tube that connects the throat to the stomach, was clogged up with food.

FOR FAMILY, FOR SOCIETY

I felt helpless. That was when I decided that I wanted to do more, not just for my family, but to contribute to society as a whole.

MS ZHANG XIAOXUAN, whose father's surgery left an emotional scar on her and led her to decide on a change of career to pursue medicine.

"The doctor was shocked," said Ms Zhang. "There was food stuck for days; it was just so clogged up."

Doctors had to suction out the food in a surgical procedure.

Her father's surgery left an emotional scar on her.

"I felt helpless," Ms Zhang said. "That was when I decided that I wanted to do more."

Ms Zhang decided to study medicine. But she was not a junior college student preparing for tertiary studies.

The 29-year-old was doing well as an investment consultant, and was six years into the job. She earned close to a five-digit sum each month. "Investment banking treated me quite well," she said.

But her father's illness was a weight Ms Zhang had carried around for a long time.

Since he was a teenager, Ms Zhang's father had been suffering from an uncommon condition known as achalasia, where the muscles of the oesophagus do not open up sometimes, blocking food from passing into the stomach.

While the family had learnt to cope with minor incidents where the father would need to vomit during meals at the dinner table, the 2013 incident paralysed Ms Zhang with worry.

"It made me re-evaluate my priorities in life," she said.

Despite initial objections from her family, Ms Zhang refocused her efforts to the pursuit of medicine.

"To my mother, I was forgoing something I had worked so hard for," she said. "But to me, this was the next step."

With no medical background although she took science subjects when she was a student at Hwa Chong Institution, Ms Zhang started appealing for internships.

She shadowed doctors, first at Mount Elizabeth Hospital, then KK Women's and Children's Hospital and Khoo Teck Puat Hospital. Soon after, she was allowed into operating theatres where she witnessed childbirth procedures.

She was doing all these while juggling between her job and applications to enter medical school. "It was really physically exhausting," said Ms Zhang, who started working night shifts so that she could intern by day.

"But that was when I realised I really wanted to go to medical school because, even though I was physically drained, I was very stimulated mentally."

Her efforts paid off when she was accepted into Duke-NUS Medical School.

"It's not just for me and my family. It gives me a chance to contribute to the whole of society."