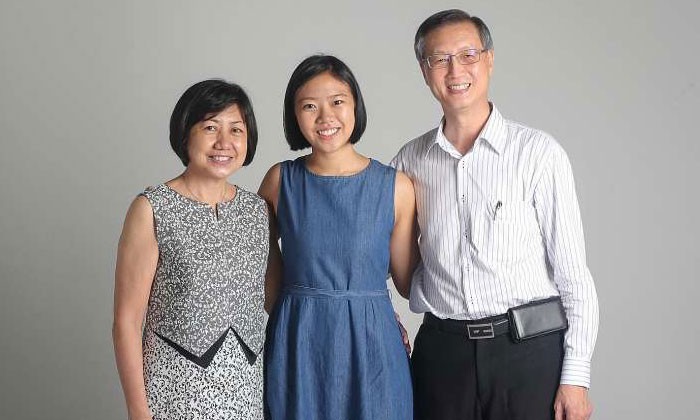 Most school-leavers would be happy with one top university offer. Nineteen-year-old Gabrielle Ong has four - and all of them to study that university course most beloved of the digital native, millennial generation - computing.

But the true millennial that she is, Gabrielle is not just a fast learner and innovative; she also wants meaning in her life.

Instead of signing up for the paper chase, she is following her passion for computer coding and looking for a job in order to hone her skills in that area - in a market where unemployment rates are rising. And, with only the A levels under her belt. The idealistic former Raffles Institution (RI) student also hopes to eventually combine her two passions of computer coding and community work.

Unsurprisingly, her father, Mr Benjamin Ong, 60, himself an NUS graduate, is apprehensive about her decision.

This is particularly as the family's two other children - Gabrielle's older brothers - have graduated from university, one with an engineering degree and the other with a degree in computing.

Mr Ong, a professional engineer who runs a consultancy firm, says: "I am an employer myself and I am well aware of how firms, and even the Government, look for qualifications when hiring people."

It is not the first time that Gabrielle has surprised him with an unconventional notion for her life's pathway. At the end of Secondary 4, after watching a documentary on Apple's founder Steve Jobs, Gabrielle told him that she wanted to drop out of school.

Gabrielle, who by that time was already beginning her love affair with coding, recalls: "I told him that I wanted to quit school and be like Steve Jobs. And he told me, 'You will be Steve Job-less'."

She explains: "It was a throwaway remark. School was interesting, but I wasn't getting as much as I wanted out of it. But thankfully my dad pointed out that I did not have the skills, so I went to JC."

Today, however, with Gabrielle completing junior college and with decent A-level scores, her dad is open to what young people want to pursue in this fast-changing world. He has come around to accepting Gabrielle's decision not to go the university route for now. In fact, he says: "I also see the value of work and the skills one can pick up from working."

Her mother, Madam Ng Kwee Heong, a teacher-turned-homemaker, says it has helped that Gabrielle took pains to explain her decision to go to work. "I would ask her one question after another. But she will always take the time to answer my questions. I realised from her answers that this was not a frivolous decision. She had thought this through."

WHY A JOB INSTEAD OF SWOT?

Gabrielle's decision to look for a job instead of going to university came after she got a first-hand experience of being employed.

This came while undertaking a three-month boot camp, or crash course, earlier this year on Web development at General Assembly (GA), a New York-headquartered education company that expanded to Singapore last year.

Despite being the youngest in her class of 22, she impressed her instructors so much that they offered her a paid stint as an instructional assistant at the end of the boot camp in May. Gabrielle says that working over the last three months at the school taught her more about designing and building websites. But more importantly, it taught her the value of work.

She says: "Teaching the course forced me to delve deeper, to understand the concepts better and, in the process, I learnt even more about programming websites.

"But I also learnt other things - I would say, the more important things. The working environment is not as structured as school. So you have to pick things up quickly and learn as you go along. And be able to handle the everyday challenges and stresses of working life.

"That's when I realised that university can wait. I can learn so much more by going to work first. In fact, I will probably gain more from a university education after a few years of working because I will be able to appreciate the relevance of what I am studying."

THE ROAD TO SELF-DISCOVERY

Although Gabrielle attended top schools - Tao Nan Primary, Raffles Girls' School and Raffles Institution, where students are known for their academic prowess - she says she learns best by doing things.

She explains: "Reading up on something is fine, but it is when I try to put it into practice that it all falls into place for me.

"I understand the topic deeply and then I will try and see how it can be applied to solve different problems."

Indeed, studies show that there are different types of learners - visual, auditory learners, and kinesthetic ones, who learn best through activity and exploration. Experts say kinesthetic learners make up just 5 per cent to 10 per cent of a population and include scientists and inventors.

Gabrielle's interest in coding started in secondary school when she had to set up websites for school projects.

She says: "Like everyone else, I used the templates available online. I thought that was the only way you could create websites. I didn't know you could create it from scratch. I always found myself wondering, 'Oh man, if only I could add a feature to this. If only I could modify the software to allow me to do something I wanted to do'."

In junior college, after hearing about some of her classmates taking up coding lessons, she decided to enrol. She completed her A levels in December last year and early this year signed up for the boot camp at GA.

She admits that the boot camp was a very intense three months, and she often had to stay up into the early hours of the morning to practise what she had learnt during the day. "But then, being able to build the stuff that I envisioned in my head and seeing it come to life really excited me and kept me going," she says. "I fell in love with coding, or rather, what I can do with coding."

She agrees that designing and building websites from scratch is a useful skill to have, but adds that for her, coding is a means to an end - to help people in need.

Like many millennials, Gabrielle wants to make a difference in the world and, for her, it's in community service.

It is not just a "millennial thing", though - her father has served for years at Care Corner, a voluntary organisation that runs a range of services for the needy.

Gabrielle says her own desire to help goes back to her early childhood days when she was close to a family friend who had special needs. "I saw how people treated him unfairly and thought how lucky I was. It grew my resolve to help the less fortunate among us."

It was in her junior college years at RI that she involved herself more deeply in community work, despite demands on her time such as serving as vice-captain of the track-and-field team.

She was part of a group of students who provided weekly tuition classes at a children's home. She even brushed up on her Malay language skills so that she could interact with the children better.

But she is most proud of a project she led with a schoolmate to get RI students involved in cleaning up the homes of needy residents living in some HDB estates. For the project done in collaboration with the Central Community Development Council, she and her schoolmates had to deal with problems of pest infestation and hoarding, but by the end of the year, they had helped to clean about 100 homes.

She says it is hard to explain what she gets out of helping others: "After helping to clean someone's home, I don't go home thinking, 'Yay, I feel good'. It's more of a deep sense of compassion and wanting to help them even more."

Gabrielle's job search has made her realise that some companies here still hire based on qualifications, not skills.

Over the last two months, she applied for 20 jobs, and heard back from only about half.

Still, that has resulted in a handful of job offers, and she is close to choosing one as a junior software developer in a start-up.

She hopes that universities will be more flexible in allowing students to defer their studies if they want to gain some work experience first, before embarking on their studies.

She is heartened, though, by the Government encouraging young people to explore their interests and aspirations at an early age. Schools are offering education and career counselling and polytechnics are giving more weight to students' aptitudes when admitting them.

The teenager is also grateful that her parents support her plan of heading to work before university, despite their apprehensions.

Madam Ng is confident her daughter will succeed in her own way, noting that Gabrielle has always been determined and hardworking.

She says: "Having seen how hard Gabrielle has worked over the last nine months and how she has taken charge of her own learning, we are more assured."

Gabrielle calls her plan to work before studying "reverse engineering" and said she does not know how long it will be before she heads to university.

"I am going to take it one step at a time. For now, I see it as learning from the university of life. It's a different kind of education, but I'm taking charge of my own learning."