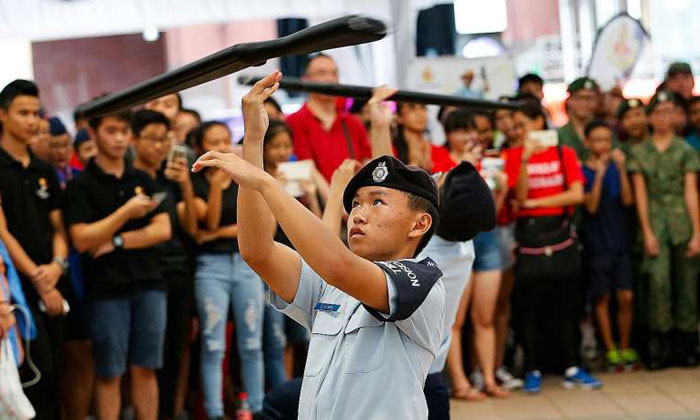 Knots were tied, bagpipes were played and fake rifles were spun and tossed in the heart of Orchard Road yesterday, at the inaugural Uniformed Groups Carnival.

Hundreds of students in spiffy blue, green and white uniforms showed off skills and drills at the event at Ngee Ann City Civic Plaza.

About 960 students from 106 schools took part in the carnival, which started last Friday and was part of the Singapore Youth Festival 50th anniversary celebrations.

Activities such as archery, tying knots, performing cardiopulmonary resuscitation and precision drills which involve spinning and tossing dummy rifles, were open to the public.

Visitors were also treated to a variety of performances - BB and GB members played tunes with bagpipes and drums, the St John Brigade simulated a fire evacuation scenario, while some NCC members performed precision drills.

NCC member Auni Bisyarah Azmi, 15, said: "I think the event gives people a better idea of what uniformed groups are. Some people think the groups are all about drills, but there are other activities that we do, such as sports."

Senior food technologist L. M. Chew, 35, was at the event with her three children aged four to eight. She said: "It was quite interesting and fun for them. They learnt about first aid and navigating obstacle courses, for instance."