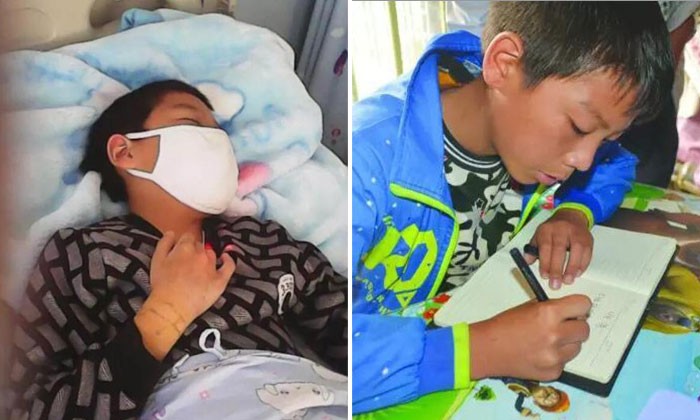 Shi Luyao, an 11-year-old boy, was diagnosed in 2013 with acute lymphocytic leukemia, which could only be cured through long-term chemotherapy and then monitored through bone marrow biopsy.

The treatment was only partially covered by insurance because it was not done in his home province of Guizhou.

Instead, it was held in Anhui where his father had moved to for work after Luyao's mom walked out on the family when he was only two years old.

After undergoing chemotherapy in August last year (2015), Luyao's condition improved and he returned to his hometown in Guizhou.

He then had to undergo irregular bone marrow biopsies to monitor his condition at a hospital in Kunming, 400 kilometers away -- a journey he always took by himself.

He would take a bus to Liupanshui city from his hometown, before transferring onto a train bound for Kunming, the capital of neighboring Yunnan province.

Luyao told reporters that he painfully recalled how he would have to wait for six hours for the train to arrive, and how he had to stop himself from crying because he wanted to hide the fact that he was alone.

The painful procedure of a bone marrow biopsy would usually warrant a couple of hours spent relaxing in bed, as per his doctor's recommendation.

However, China Daily reports that the young boy always started his journey home immediately after the procedure was completed so that he could race back home to attend school.

Upon his return to Liupanshui, he would wait for daybreak before being able to catch the first bus back to his hometown.

"I can't remember how many times I saw the sunrise at the railway station," Luyao said as he burst into tears.

Despite the emotional turmoil it caused, the torturous trip is all worth it when he gets back to his hometown in time for classes.

During his chemotherapy, he was forced to leave school for two years.

He asked his grandparents to send him back to school once his condition improved.

Since then he has maintained a high level of academic performance.

His Chinese language teacher, Peng Lu, recalled how he always handed in his homework once he returned from the hospital.

Peng even arranged for four classmates to study with and take care of Luyao, once he knew about the illness.

His doctors have said that while this treatment will continue for another two years, there will likely be no need for a bone marrow transplant.

Related Stories
Volunteer who cooked for teen trapped in baby's body: 'It was my way of comforting her'
'Werewolf' Bangladeshi girl seeks help for rare excess hair condition for chance at normal life
Harsh conditions kids around the world have to endure to get to school
More About:
medical condition
sick
youth
school
student
boy with leukemia