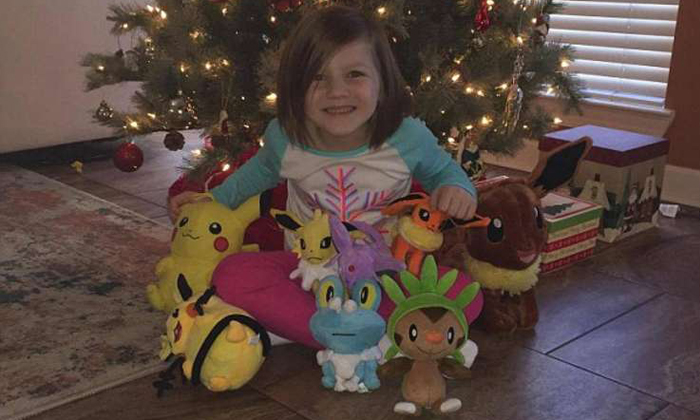 A six-year-old girl used her sleeping mother's thumbprint to unlock an iPhone - and bought herself US$250 (S$363) worth of Pokemon toys for Christmas on Amazon.

According to the Wall Street Journal, an exhausted Bethany Howell of Little Rock recently fell asleep on the couch while her daughter Ashlynd was playing nearby.

The following day, Ms Howell was shocked to discover 13 order confirmations for Pokemon gifts and initially thought someone had hacked her account.

She eventually figured out that little Ashlynd was responsible. "My phone was sitting on the coffee table next to the couch. Ashlynd picked it up and used my thumb to open the phone," she told the Daily Mail.

The girl reportedly told her mother: "No mommy, I was shopping. But don't worry - everything that I ordered is coming straight to the house."

Ms Howell added that Ashlynd was "really proud of herself".

Speaking to the Daily Mail, Ms Howell said she was not even aware that her daughter knew what Amazon was. Ashlynd had previously used the phone to watch videos on YouTube.

She learnt that Ashlynd was able to make the purchases as her credit card details and address were already saved into the system due to the auto-fill feature.

Amazon reportedly only allowed Ms Howell to return four of the items. She then broke the news to Ashlynd that she would not be receiving all the toys: "Well, Santa found out and this is what Santa is going to bring you for Christmas."

Related Stories
This 5th grader has more game than you ever will, and this love note proves it all
Here are some children's homework that will put a smile on your face
5th grader throws shade at boy who had a crush on her through hilarious warning note
child
parent
youthphoria
youth
kids