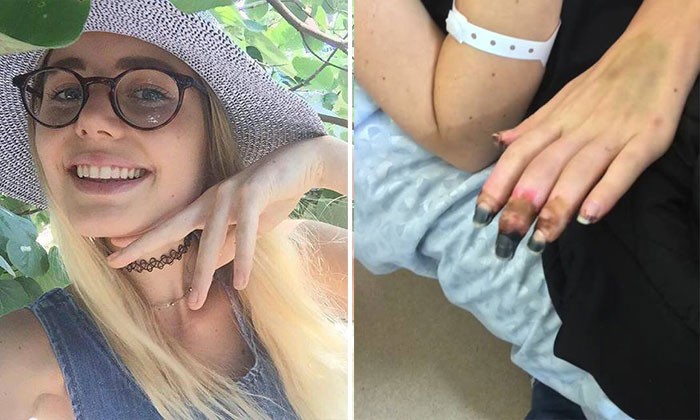 An Australian citizen, Ms Lietzov, a 19-year-old, used to suffer from an eating disorder and was barely weighing 80 pounds.

Her parents was concerned.

According to wittyfeed, she shifted her diet plans, by becoming a vegan.

She was obsessed with her calorie intake and being a vegan worked for her.

She shared her passion for food online and loved the recipes of vegan diet.

However, the stress became too much for her.

In March 2016, she fought with her mother and sister which propelled her to swallow down to many pills along with alcohol.

She was found unconscious by her father and was immediately taken to the hospital.

Doctors tried to restore her blood circulation however, the pills have done too much damage and they had to induce a coma to save her life as she lacked oxygen,

The doctors gave her a drug which had a really bad side effect and it compromised the blood supply to her fingers in order to save her life.

She admitted to trying to take her own life but the incident woke something in her and she feels stronger than ever now.

She is grateful for her family who supported her through her a very dreadful time,

Related Stories
Woman's severe eczema: She was covered with boils and pus glued her bedsheet to her skin
Malaysian woman bites 1cm of husband's finger because he came home late -- and swallows it
Worker whose fingers were crushed by falling metal gets just 1 day of medical leave
vegetable
loses fingers
youth
injured
drugs