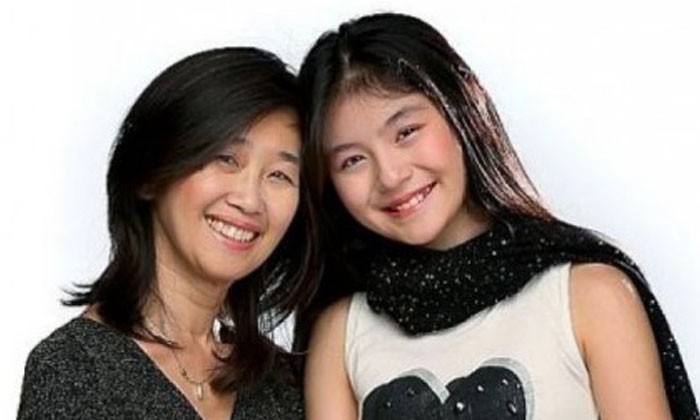 She has big dreams and wants to sing with Taylor Swift.

Quite an ambition perhaps, but at 11, Melissa Wei-En Hecker has already performed at local singer-songwriter Dick Lee's 60th birthday concert.

Says the Primary Five student: "That was one of my most memorable events. First, because I managed to meet Dick Lee in person.

"Also, the venue was the Star Theatre, which sits 5,000 people. It was huge and quite intimidating."

The biggest crowd she had previously performed for was 1,500 people, and the theatre's larger capacity initially frightened her.

Melissa took two months to prepare for the performance on Aug 19 but says that sometimes she requires only a few weeks to prepare herself.

"I can learn songs quite quickly so it's not usually a problem," she says.

Last year, she was the grand champion at Popstar of the Year - an annual solo singing competition organised by Precious Talents International and Kids Performing Academy of the Arts

From there she went on to place second at American Protégé in both the Classical and Musical Theatre categories. American Protégé is a vocal contest in the US which involves participants from all around the world, who are required to send in videos of themselves singing.

She also has had plenty of performances in musicals and concerts within the last four years.

She was 'little Emily' in Emily The Musical, an adaptation of the book Emily Of Emerald Hill.

She also starred in Turandot And Pagliacci, both staged by Singapore Lyric Opera as part of its children's ensemble.

"I would love to sing with Taylor Swift, or to be on Broadway as Glinda in Wicked, or on West End as Eponine in Les Miserables," she says.

Her dreams of a singing career started with the TV show Hannah Montana.

"My first inspiration was Miley Cyrus when I watched her on Hannah Montana. Her song, The Climb, is still a favourite.

"It reminds me that the journey to get to where I want to may be difficult, but I must persevere," Melissa says.

Her parents first heard her sing The Climb when she was just seven years old.

Her mother, Ms Bridget Yeo-Hecker, says: "She would usually sing along to Miley Cyrus or Taylor Swift in the car.

"But it was at her kindergarten graduation concert, where the graduating classes put up a musical, that we realised that her voice was special.

"She was comfortable and really enjoyed being on stage."

Ms Kuo Po, 54, the artistic director of Kids Performing, says of Melissa:"For 11, she's very focused and she works very hard because she always prepares her songs before class and has them memorised way before.

"Her vocal quality is very polished, velvety and pleasant to the ears."