Time for injured giant turtle to go back home to Malaysia 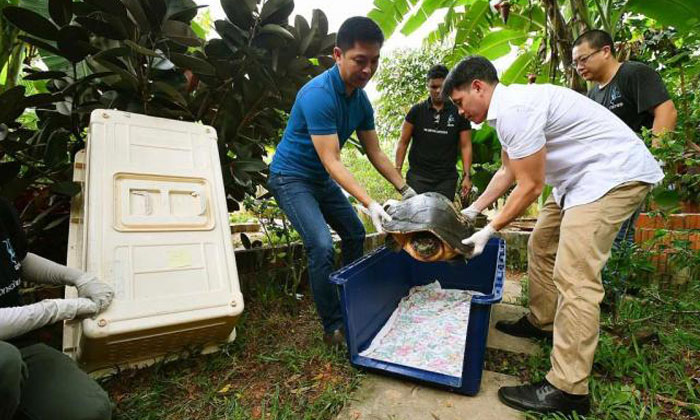 The Malaysian native landed here in mysterious circumstances more than a year ago and was discovered while crossing a road in the western part of Singapore.

Likely a victim of smuggling, it was found injured, with part of its body deformed. But yesterday, Rahayu finally got to go home.

The Malaysian giant turtle, which was found with a fish hook in its mouth and a deformed shell, had been cared for by the Animal Concerns Research and Education Society (Acres), a wildlife rescue group.

A member of an endangered species, the turtle nicknamed Rahayu was rescued by Acres in 2015.

Yesterday, the female turtle kept its head tucked in its shell as a large group, including Minister for Social and Family Development Tan Chuan-Jin and Acres chief executive Louis Ng, gathered at Acres' premises near Choa Chu Kang to bid her goodbye.

The not-so-giant turtle was put in a crate, which was later placed in the boot of a car, for its long ride home.

Mr Ng, who is also an MP for Nee Soon GRC, noted that Rahayu had a deformed shell and was likely brought illegally into Singapore and then kept as a pet in a small tub.

The creature, a member of the largest freshwater turtle species in South-east Asia, is the first reptile Acres has released back into the wild.

The two other animals the group previously released were both monkeys, including Asha the rhesus macaque in 2006.

"We can right this wrong by sending them back to where they came from so they can live out their lives back in the wild again," said Mr Ng.

"We didn't want this to be the final chapter in the life of all these animals."

The turtle, which weighs 30kg and measures about 70cm in length, was handed to the Malaysian authorities yesterday afternoon. It is not known how old it is.

Rahayu is expected to be released into a nature reserve in Malaysia on Sunday.

"She is an ambassador to the cause that we are undertaking, that our rescued wild animals deserve a second chance at living free and that it can be done."

Considered endangered by the International Union for Conservation of Nature, the Malaysian giant turtle is traded for its meat and used in traditional Chinese medicine, and is also kept illegally as a pet.

At the event yesterday, Mr Tan urged members of the public to do their part by not collecting exotic pets, consuming their meat or using their body parts for medicinal or religious purposes.

The Acres Wildlife Rescue Centre is home to more than 190 wild animals rescued from the illegal wildlife trade.

The animals there were either abandoned or kept as pets in Singapore. They include Indian star tortoises and pig-nosed turtles.