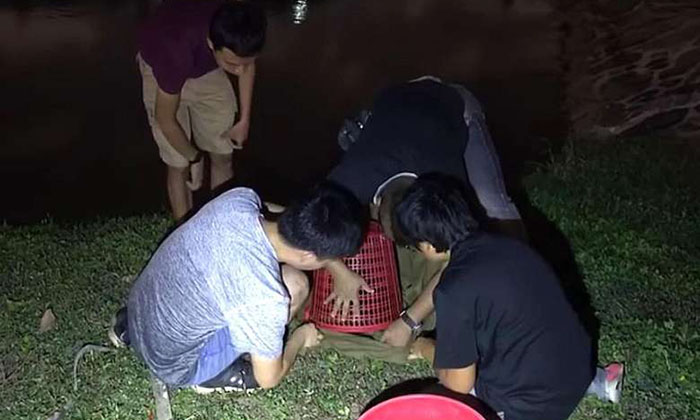 A pre-Chinese New Year dinner turned dramatic for a family of otters in Kallang Basin on Thursday.

When an otter pup was separated from its parents while frolicking in the waters, a group of otter watchers including Mr N. Sivasothi, a biological science lecturer at the National University of Singapore, grew concerned.

They scanned the area, increasingly worried.

Mr Sivasothi said the pup would not be able to fish for itself and, at an estimated 21/2 months old, would be vulnerable to predators such as large fish, herons and snakes.

One of the watchers, Mr Nick Soo, located the pup circling in the water and alerted the otter-watching community.

The 15 otter watchers rushed over with torchlights, a laundry basket and a blanket.

The pup could not, well, otter its own rescue.

Using the laundry basket and the blanket, the rescuers took the pup back to its holt by 9.30pm.

The drama was too much for the little one and it went to sleep immediately.

The incident highlights what can happen when parents are distracted around bodies of water.

The 13 members of the koi-gorging Bishan otter family had made their way to Kallang Basin for their reunion meal and were busy munching the obligatory fish when two pups, each about 21/2 months old, wandered off.

Although one made its way back, the other went missing. Mr Sivasothi said: "It was an unusual situation where the family was spread out quite far apart."

The otter watchers checked on the animals early yesterday morning and saw that the pup was reunited with its parents.

Last May, otter watchers saved a six-week-old smooth-coated otter pup named Toby that had fallen off a ledge into a canal near Fort Road.

Toby was sent to Wildlife Reserves Singapore for treatment and reunited with its family 10 days later.

Mr Sivasothi said: "It's nice to see how the otters have brought the kampung spirit back."

The smooth-coated otter, formerly thought to be extinct in Singapore, returned in 1998 as the island's waterways became cleaner.

There are estimated to be 50 such otters in Singapore now.

They are distinct from the oriental small- clawed otters that can be found on Pulau Ubin.