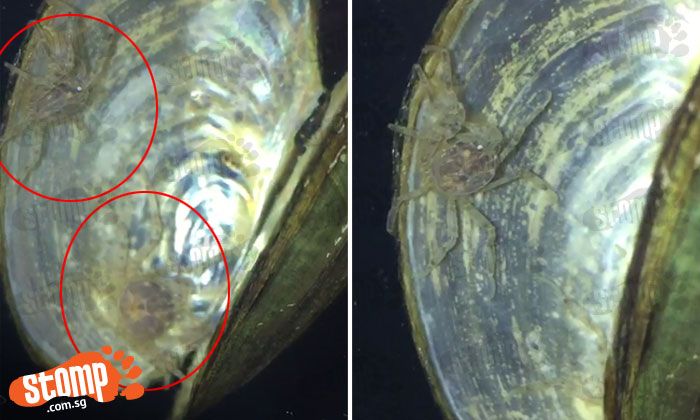 Stomper Lau Lup was in the Hougang neighbourhoods yesterday (Jan 18) when he stumbled upon a pet shop selling micro crabs imported from Thailand.

Lau Lup did not plan to buy the crabs, in fact he did not even know what they were. He had thought that they were another species of fish from a far at first, but learnt that they were micro crabs when he saw the sign on the tank.

The Thai micro crabs (Limnopilos naiyanetri) are a fully aquatic crab species that truly lives up to its name: their carapace grows to a maximum size of around 1 cm (0.4 inch), reported Aquariadise.com.

Because of their size and low waste output, their tank requirements are similar to that of a dwarf shrimp -- properly cycled setup with high water quality and a filtered aquarium of at least 19L.

According to the site, these micro crabs appreciate a densely planted and decorated tank because these crabs can be shy, and need plenty of places to hide.

Though it was a costly $5 for one tiny crab, Lau Lup decided to buy two for his own fish tank at home, to "try" them out.

"As seen in the video, I put the crab on the clam shell to compare the size of it to the shell, and to also show the colours and pattern of the crab.

"If you look closely, it resembles the iridescence of the clam shell!"

However Lau Lup does not recommend others to purchase them unless they are sea critter collectors.

"They are small and harmless, but I think they are meant for people who are into nature and aquatic creatures. And since they are from Thailand, it is not regularly offered in the market -- so the price is quite steep.

"And since its really small and they often hide, buying one or two is not worth because you can't see them. I think this is more like a collector's item, so for people who are really into aquatic critters.

"As for food, they feed on organic materials, dead fish carcasses etc.Their pincers are really small so they can't really grab much."