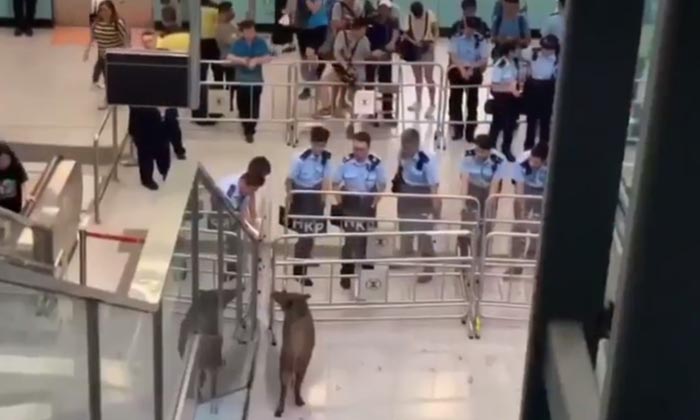 A 49-year-old woman was injured when a wild boar wandered into an MTR station in Hong Kong on Wednesday (June 19).

Stomper Mike and Stomper Happy alerted Stomp to a video that has been circulating online, of the boar strolling about in an MTR station.

The video has been shared on a Facebook page, Fabrications About The PAP.

In the video, the boar can be seen walking past commuters, from one side of the station to another.

Another video shows the wild boar being backed into a corner.

Police officers are holding onto barricades that are preventing the wild boar from escaping.

Barricades were also put up to prevent passers-by from being to close to the scene.

The wild boar stays near the barricades, facing the police and is next seen standing in a patch of blood.

According to South China Morning Post (SCMP), the wild boar was spotted at Forbes Street before it entered Kennedy Town MTR station.

SCMP said that the wild boar's "limbs were injured and bloodied by escape attempts".

The wild boar was shot with a tranquiliser and taken away in a cage by officers from the Agriculture, Fisheries and Conservation Department at about 9pm.

The woman sustained minor leg injuries due to the boar and was conveyed to Queen Mary Hospital.

Related Stories
Attack of the angry bird at Toa Payoh
Indonesian woman mauled to death by pet crocodile after falling into enclosure
There's no taming these 2 shrews fighting at Toa Payoh market
More About:
undefined