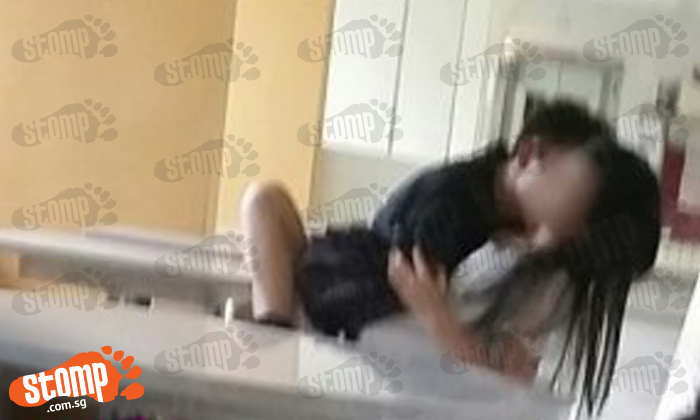 Stomper Nunga feels that public display of affection (PDA) will lead teenagers to think that it is okay to do so, as seeing it live is different from television and movies.

I honestly think people shouldn't even kiss in the public... If it is a quick one, it is ok. But those who think that they are in a park, they need to understand there are kids around watching.

First reason why it is inappropriate: Kids are around. Young people follow what other people do. Even with a kiss.

I understand that media plays a part but realistically speaking, kids won't do unless they see it with their own eyes in front of them, live. This could lead to sexual acts. Kiss first.. Then it leads to.. You know... where it gonna lead.

In addition, there are already a lot of teen pregnancy case. There is even a teen mother support or some sort which I felt like, it shouldn't even exist because this makes society, or teenagers, think that it is ok to be pregnant because at the end of the day, they still gonna get support from organisations and will be forgiven. I am not saying we shouldn't forgive, I am saying we shouldn't give in either. Some teen mums even throw their baby out of the window cause they find it annoying.

Second reason, are the couple homeless that they cant do in private? Or are they just broke that they couldn't afford some private room? I understand some people they are very active in sex.

But if they can't control that feeling, get ready for that feeling to control you. This is dangerous cause, this could lead to rape, molesting and upskirt, etc etc.

Last reason as the witnesses... I am usually left lost. I don't know whether to look at them because they are standing out from the crowd or look away because it is an inappropriate scene for my age. So sometimes I just stand there... not doing anything.

It felt very very weird even to go up to them and say stop. So standing there uncomfortably hoping they would stop, is the best way for me tho.

I witnessed two NS men making out in front of me in their uniform. Honestly, I feel like there is nothing wrong with being gay, I just couldn't do my work in the library in peace. I ended up looking at my feet for 30 minutes till they leave...

All thanks to their act, I am still doing Qn 2.

The other time was when I was checking out if the 7-11 in Bugis seats are available, only to see two heads kissing each other beside the traffic light like nobody's business.

In conclusion, PDA shouldn't be shown in public. If it is a hug it is ok. A quick peck, it is alright. Getting too intimate, I think they should think first because the world doesn't evolve around them, so they should be considerate.

Related Stories
Friends meet at Jurong East void deck to study science... only to see another type of 'chemistry'
Surely this couple can find a better place to snuggle up?
Young couple cannot keep their hands off each other on board MRT train
More About:
October 2016
What Say You
PDA
inappropriate activity
inappropriate