Volkswagen driver dies after attack by 4 men at JB petrol kiosk: He was stabbed, mowed down twice 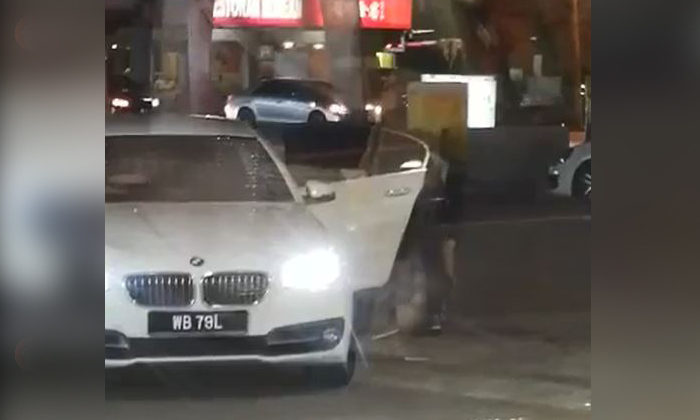 A manhunt is underway in Johor Bahru following a brutal murder of a motorist at a Shell petrol station on Sunday (Dec 17) night.

The incident occurred at 7.30pm on Sunday in the compound of a Shell petrol station in the busy Jalan Sri Pelangi in Taman Pelangi.

A video of the incident was widely shared on social media. Many are expressing shock over the horrific attack that was carried out at the busy petrol station which is frequented by Singaporeans as it is located near the Causeway CIQ.

According to The Straits Times, the victim was approached by four men when he was checking the tyres on his Volkswagen.

A foreign woman who claimed to the be the man's wife, who was inside the vehicle, immediately ran for help.

In the video, the victim was seen being dragged out of a white BMW with the registration plate number WB79L.

Khalil, a witness, told Malaysian newspaper The Star, "While he was struggling with the suspects, one of them stabbed him on the left chest causing him to collapse on the road."

Shortly after, one of the men threw a firecracker at the men and the BMW drove off.

In the video, people were heard screaming and shouting, "Bomb, bomb!" as the firecracker exploded.

The car then drove a full circle as a woman exclaimed in Chinese, "He is going to hit him!"

The BMW then ran over the victim and reversed into him, running him over again.

Witnesses were also heard shouting to call the police.

The BMW then sped out of the station, stopping briefly for one of the assailants to enter the car.

Stomp has edited the video and removed certain parts due to their graphic nature. Viewer discretion is advised. (story continues below video)

The man was pronounced dead at the scene and Malaysian police have classified the case as murder.

The owner of the BMW used in the attack, a 55-year-old man has been identified by the police. He has since been placed on the wanted list.