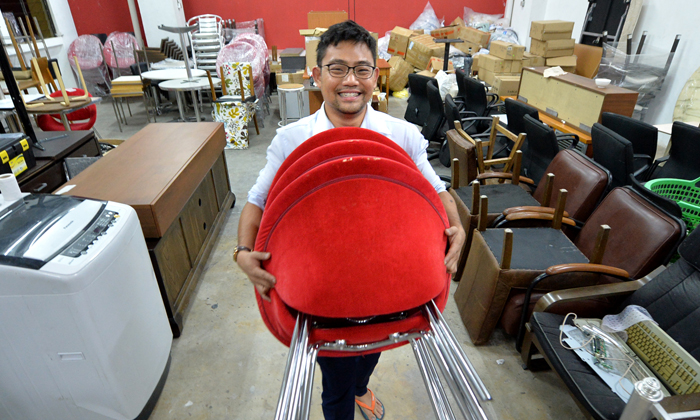 He was a credit trader at Barclays for 1½ years, but his latest exchange might be his biggest one yet.

Two months ago, Mr Daniel Wong, 26, traded his comfortable office for a warehouse to start his company, Karang-guni.com. Karung guni is Malay for rag-and-bone man.

He told The New Paper: "I loved my job as a trader at Barclays, but I was thinking about how I could use trading to help society."

His business provides on-demand recycling for residents and corporations. It collects unwanted items such as newspapers and electronic goods.

On his website, karang-guni.com, customers can make a booking for discarded items to be collected. They can also send in a picture of an item, which would allow Mr Wong to quote a price for the item if he feels that it can be resold. If not, he will charge a collection fee to take it away.

Karang-guni.com then sells the items to new owners or recycling plants.

Mr Wong, who used to earn a six-figure sum annually, traded his Honda Jazz for a van. He runs most of the operations - collecting and dropping off the goods - with his two partners.

He first thought of the business about 10 months ago and spent four months brainstorming and consulting business professionals to assess if it was possible.

In those four months, he said he slept only three hours a day doing research and learning how to set up and run the website.

As part of his research, he even followed a karung guni man around every day for two months. He would go door to door with a horn and trolley to collect unwanted goods.

He spent another four months pilot testing the business to see if it would be profitable. This was crucial as his investors wanted proof that the idea would work before investing.

He said the experience convinced him that there was money to be made in the industry and he learnt more about what kind of items households here throw out.

In the end, he raised enough - an amount in the high five-figure region, he said - to start Karang-guni.com. The money was for operating costs such as buying the van, petrol, website and rental of a warehouse in Hillview Terrace to store the goods.

The Singapore Management University (SMU) graduate in business management and finance admitted that this was not a job he would have considered before as the rag-and-bone industry is difficult to understand and is an old industry.

But he had wanted to be a trader since he was 18, when he first learnt about it.

He said: "What we're doing is essentially trading - finding something that nobody wants and selling it at a higher price."

The business was fully operational two months ago, but he claimed the company has received 800 inquiries in the last two months.

Mr Wong's mother, Madam Florence Tan, 58, who works in administration and finance in an oil, sea and gas company, said she was initially not in favour of her son going into this industry.

She told TNP: "I didn't send my son to university to become a karung guni man.

She added: "He explained to me what he was doing and broke some mindsets I had. I'm happy that he's at least pursuing his dream."

Mr Wong eventually wants to establish Karang-guni.com as a social enterprise as "profit can be made from doing good", he said.

He recounted an encounter he had when he worked briefly as a delivery man for an electronics and home appliance company.

"I delivered a washing machine to an elderly woman who couldn't afford to buy one, but needed it because she had arthritis."

He plans to hold regular events where those with lower incomes can come to his warehouse and pick up an item they need.

Mr Wong, who works 16-hour days, seven days a week, said he always thinks back to something his late grandmother told him.

He said: "(She told me that) if you wake up and work for something with half the pay and double the hours, then you know you've found something you love."

Broke even within first month

Mr Daniel Wong said that within the first month, he had already broken even on operating costs.

He foresees that within the next six months, he will also break even in terms of the capital that he put into starting the company.

This is quite a feat considering that the only staff are Mr Wong, his two partners and three to five ad hoc employees.

His partner Daniel Kao, 25, an economics undergraduate in his final semester at Nanyang Technological University (NTU), said he joined Mr Wong because he saw potential in the idea.

Mr Kao said: "He's the most hard-working person I've seen and he's obsessed with the business."

Mr Kenneth Lim, who has been Mr Wong's friend since primary school, also intends to invest in the business. In his free time, Mr Lim, 27, has already been helping Mr Wong with his business pro bono.

He said: "It's great to have a friend on board so you won't be alone as support is important when you're starting out."

When asked why he decided to enter the rag-and-bone industry, Mr Daniel Wong said there is a gap in the market because Singapore has a huge waste problem.

Singaporeans generated 7.67 million tonnes of waste last year, according to a report by The Straits Times.

Given Singapore's population of about 5.5 million last year, this works out to about 1,400kg of waste generated per person.

Two of the top three contributors were construction ferrous metals and paper or cardboard - the latter has a recycling rate of just 51 per cent, according to the National Environment Agency (NEA) website.

Mr Wong added: "There is a demand for this in Singapore, but most Singaporeans are not willing to do jobs like this."