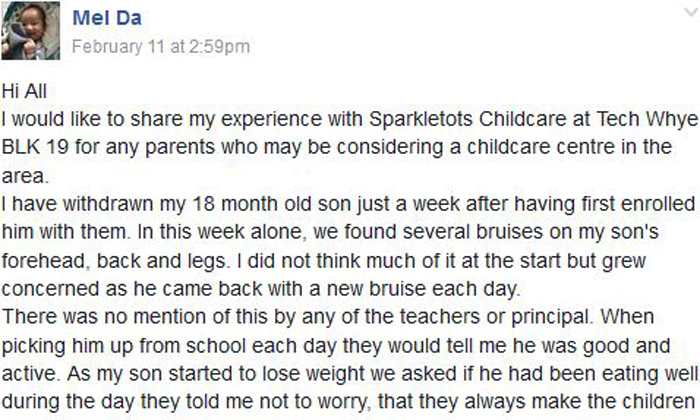 Stomper Melvin was shocked to see a woman's post on Facebook to warn other parents after allegedly seeing a pre-school teacher hold her 18-months son upside down and press her elbow down on the toddler's back.

The woman, Mel Da, detailed how she noticed her son had several bruises on his back, forehead and legs in his first week at Sparkletots childcare centre at Teck Whye.

Mel said she did not think much of it at the start, but grew concerned when the boy started to return home with a new bruise each day.

However, Mel stated that the teachers and principal did not make any mention of this, and told her that the boy was active and good when she picked him up from school each day.

"As my son started to lose weight we asked if he had been eating well during the day and they told me not to worry, that they always make the children finish their meals even if my child could not yet eat on his own or speak," said Mel.

"Yet towards the end of the week they changed their tune and said that he would simply take a spoonful or two of his food and then run off to play, that they had too many children to take care of and cannot focus too much time on each child."

Worried, Mel decided to stay behind one day and peeped through the curtains to see what was happening in her son's class.

"I was shocked. I saw my son being held by his ankles by the teacher, and he was struggling as he was pressed down by the teacher's elbow on his back.

"I now knew how his bruises had come about. When the teacher saw me outside looking in she immediately let him go and passed my son to another teacher.

"I was furious and went in to see the principal. After insisting on reviewing the CCTV footage, the principal confirmed the incident, apologised, promised to take action and assured me that this teacher will not be handling my son.

"Naturally I criticised the teacher for her mishandling of my child when she came and apologised the next day.

"The next day, I found another bruise on my son's stomach and I withdrew him from the childcare."

Mel also posted this warning at the end of her post.

"Dear parents, please take care in considering the type of care for your child.

"I hope you do not experience what I have but I worry that this might be happening to other children who are not yet able to communicate well."

She also responded in the comments section of the post to say that she had since lodged a police report over the matter.

When contacted by Stomp, Sparkletots said that it would not comment on the incident as the case is under investigation.

In response to Stomp's queries, the police confirmed that a report has been lodged and investigations are ongoing.

Related Stories
What on earth is this person doing? Baby gets roughly flipped on toilet floor and held under shower water
Maid imprisoned 2 months for abusing four-month-old baby
Maid punched and hit 2-year-old boy's head with a wooden toilet brush after scolding by employer
child abuse