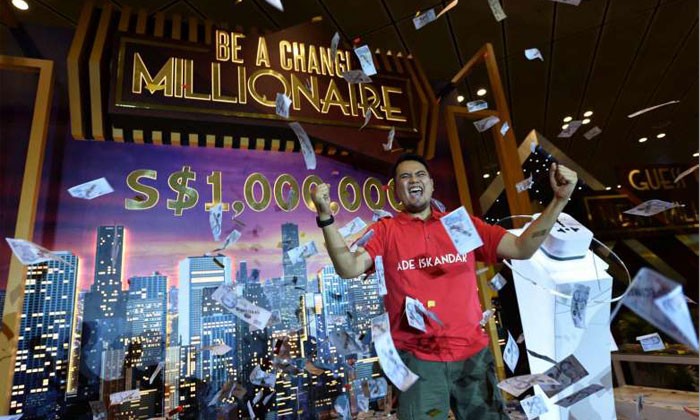 On his maiden trip to Singapore last October, Mr Ade Iskandar Roni bought a $51 Adidas T-shirt as a present for his best friend.

That thoughtful purchase has helped him win a cool $1 million.

Mr Ade, a procurement personnel who lives in South Jakarta, was on Sunday (Jan 15) crowned the new Changi Millionaire.

He beat seven other finalists in three rounds of games - including picking pre-packed luggages at random and putting them through a scanner to see if items were packed correctly.

His prize money works out to 9.3 billion Indonesian rupiah - a sizable sum when the country's GDP per capita is 46 million rupiah as of 2013.

"I want to bring my whole family to Mecca, maybe buy a new house, a new car," he said.

Mr Ade is married with five children and intends to take his extended family of 30 to 40 people on the Muslim pilgrimage to Mecca in Saudi Arabia.

The other seven finalists - from India, Australia, United Arab Emirates, Malaysia, Indonesia and Singapore - left with $5,000 each.

Changi Airport flew the foreigners in with a three-night hotel stay for the event.

This is Changi Airport Group's seventh million dollar draw since its launch in 2010 to promote retail at the airport. There were 1.2 million entries from 225 nationalities from May to October last year.

To qualify for a chance at the draw, participants had to shop or dine at Changi Airport with a minimum spend of $50 in a single receipt.

On Sunday, Changi Airport Group announced that it had $2.3 billion in retail sales last year, a five per cent increase compared to 2015 sales, which was a record high of $2.2 billion.

The airport saw more than 50 million transactions last year, with Chinese shoppers making up 30 per cent of sales, followed by Singaporeans at 20 per cent. Other top shoppers were from Indonesia, India and Australia.

Perfumes and cosmetics, and liquor and tobacco were the two most popular product categories at Changi Airport, followed by luxury goods.

For Mr Ade, the Adidas shirt have become his best buy so far.

He said: "I still can't imagine right now what $1 million is in Indonesia."