What's this, another CNY boyfriend ad? $1,888 for this 'auntie slayer' 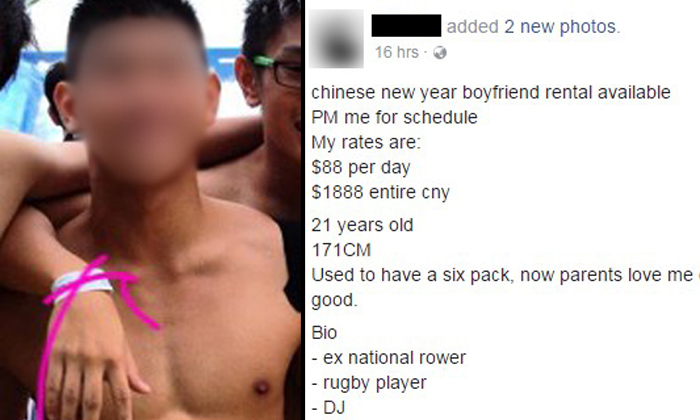 As Chinese New Year looms closer, the number of advertisements offering 'boyfriends for hire' also seem to be on the rise.

It was earlier reported that a 26-year-old Singaporean guy, Ong, was offering himself for 'rental' over the festive season.

Although he did not list his rates publicly, the 172cm-tall guy bragged of the many different personas he could pull off to impress your relatives.

This time, another hunk in Singapore is offering similar services for $88 per day and $1,888 for the entire Chinese New Year.

According to a Facebook post which Stomper Aiden shared with us, 21-year-old Tan is 171cm and "used to have a six pack, [but] now parents love me cause I'm Buddha-looking good."

He also appears to be multi-talented, describing himself to be a former national rower, rugby player and DJ.

In his bio, he also wrote that "they call me the auntie slayer for a reason. I make them smile."

Tan also obviously has a good sense of humour, by saying that his looks has a 3/10 rating from his friends, but a perfect 10/10 score from his mother.

And out of the many different personalities he is willing to play, one really takes the cake: "A guy who has five months to live (so you can have an excuse after CNY)"