Were they racing? Driver lands himself in accident after speeding in the rain with another 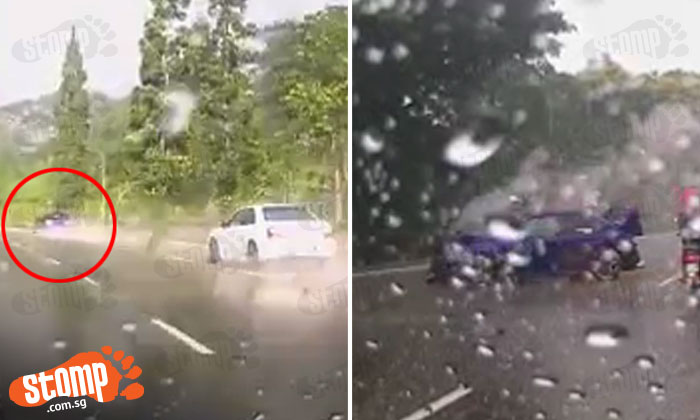 A driver of a purple car landed himself in an accident after speeding in the rain while allegedly racing with another motorist on the SLE on May 21 at around 5pm.

Stomper Timothy sent Stomp a video circulating on WhatsApp that shows what happened prior to the accident.

The road was wet at that point of time.

Later in the video after a scene cut, the purple car was in the middle of the road against the flow of traffic.

It was stationary and its bonnet was damaged.

A motorist in a helmet was seen inspecting the damaged purple car, but it is unclear if he was involved in the accident.

In another video posted on Beh Chia Lor - Singapore Road, the car can be seen skidding and hitting a barricade by the side of the road. It then spun out of control before coming to a halt.

A lamp post fell and the bumper of the purple car became dislodged in the accident.

Said a police spokesperson in response to a Stomp query:

"On 21 May 2017 at 4.59pm, the police were alerted to an accident involving a car along the SLE towards the TPE after Woodlands Avenue 2.

"A man and a woman in their 20s were conscious when conveyed to Khoo Teck Puat Hospital.