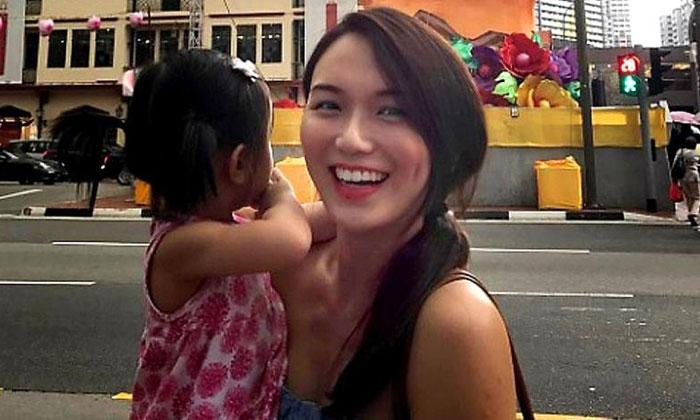 Children these days have an inflated sense of entitlement and it's not just a Singaporean phenomenon, said local actress Joanne Peh.

She said: "At one time or another, we've all had to endure the antics of a screaming child in a restaurant, demanding an ice cream dessert until the parents are so embarrassed and flustered that they order it just to keep the child quiet."

When Peh spent about a month in Beijing, China, with her husband - actor Qi Yuwu - and daughter after giving birth to her in 2015, she found herself surrounded by kids from single-child families behaving with disrespect, too.

The 33-year-old, who is pregnant with her second child, said such observations have made her determined to instil strong values of propriety in her children - her firstborn turns two in August.

Fresh from rounding up four months of extensive travelling for Unique Towns - a TV series that explores interesting places around the world, Peh shared how she has embraced parenthood, and her strategies for child-raising.

KEEPING BABY QI OUT OF THE LIMELIGHT

Peh has never revealed her daughter's name to the public. On her Instagram page, she affectionately refers to her as Baby Qi. Hiding their little one's identity was a conscious decision the couple made.

"She was born with both of us in the limelight," explained Peh. "We want to give her the freedom to decide if she wants that kind of life."

Baby Qi's personality is starting to develop and her preferences and personality are emerging.

Peh is not keen to impose any activity or toy on her. In fact, remembering how much she herself enjoyed creating objects out of her imagination as a child, she recently bought Lego blocks for Baby Qi to play with, but her daughter was not interested at all.

Although disappointed, Peh said: "It's her choice. I'd rather my daughter choose her own interests, so she'd be more motivated to learn about it."

In fact, this first-time mum sees herself using this approach when it is time to introduce her to enrichment activities.

The key to successful parenting is to be responsive to your child's needs, Peh said.

"Parents need to be aware that their children are constantly growing, so their capacity to learn increases and their interests may change."

Meeting a child's needs while not giving in to her wants is what she learnt from The Me, Me, Me Epidemic: A Step-By-Step Guide To Raising Capable, Grateful Kids In An Over-Entitled World by Amy McCready. The book teaches parents how to unentitle their children.

When Baby Qi cries now, Peh said she has learnt to figure out whether it's due to distress or a tantrum. The latter signals a different need, and is mostly a cry for attention.

Peh has started making "mind, body and soul time" for her daughter. That means an uninterrupted 30 minutes devoted to doing things the little girl enjoys, like playing outdoors.

"You don't have to take your child to Disneyland. Sometimes, she just wants you around her."

And this is obvious when Baby Qi crawls over to Peh and rests her little head on her lap, or hugs Qi from the back like a koala.

SETTING CLEAR RULES FROM DAY ONE

For instance, Baby Qi, who can feed herself, isn't allowed to leave the table until she finishes her food. And she doesn't have access to electronic devices because Peh believes that kids need human interaction to develop proper social skills.

"My baby has never seen an iPad or watched television," she said.

When the time for an introduction to the digital world comes, Peh wants to ensure her child benefits intellectually from it, and is already researching coding classes that can help develop perseverance, imagination and problem-solving skills.

PREPARING HER FOR THE FUTURE

While filming Unique Towns, Peh and Baby Qi spent as many as 10 days apart in one go.

It was hard for both mother and child, who was looked after by a nanny when she was away, but Peh said: "It helps her to learn that mummy is not always going to be around."

If that's not enough, the young parents are already thinking about playschool.

Peh feels it would be a good opportunity for Baby Qi to interact with her peers and develop social skills, but she is not ready for others to set the rules for her daughter just yet.

Needless to say, she is still thinking about it, especially since she is back at work for the Channel 8 drama Dream Coder, which explores the fast-paced lives of people working in a tech start-up.

"It's been two years since I've done something like this, so I honestly don't know what to expect. I will just take things as they come.

"We try not to plan too much because things change."

This article is adapted from Simply Her, which is now available in both print and digital formats. Visit www.simplyher.com.sg to subscribe.