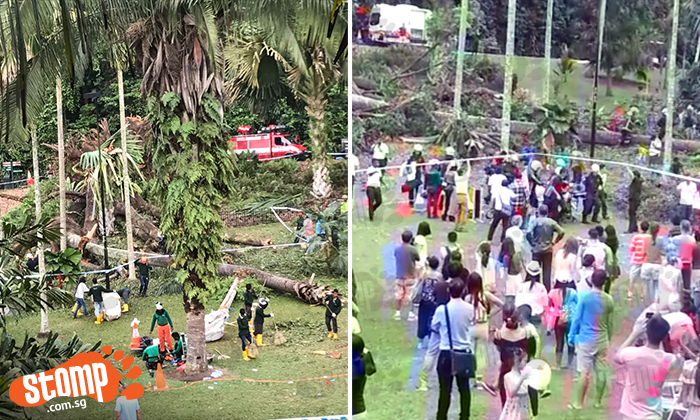 Stompers Helen, Kelly, Othman, Faith and Eugene alerted Stomp to an incident of a 40m tall tree falling at the Botanic Gardens at 4.25pm today, killing one and injuring four.

The Stompers were visiting the Botanic Gardens when the incident occurred, and photos and videos they took show the aftermath of the huge tree's fall.

A concert called "Canada 150: Celebrating Diversity through Music and Film", which was supposed to take place at the stage from 5pm to 7pm, was cancelled after the incident.

"I reached after it just fell," said Helen. "The area was cordoned off.

"Many of the Canadians who were there for their event ended up having a picnic on the slopes of the un-cordoned area.

"Three SCDF vehicles were at the scene. The toppled Tembusu tree hit another smaller tree and that tree also toppled (see pictures carefully).

"Many foreign workers were removing parts of the tree after it was sawn off."

The SCDF said in a Facebook post that it was alerted to an incident of a fallen tree at the Singapore Botanic Gardens with persons injured at approximately 4.25pm today.

"A total of five casualties, including two children, were conveyed to the National University Hospital in three Ambulances.

"SCDF is currently at work with NParks personnel in the search operation."

The National Parks Board (NParks) said it is investigating the cause of the tree fall.

All programmes at the Singapore Botanic Gardens on Sunday (Feb 12) have been cancelled.

NParks told The Straits Times that it is focusing on clearing up the site.

Members of the public had also rushed to help, but had to leave later as the area was subsequently cordoned off.

In a Facebook statement, police advise members of the public to stay away from the site to facilitate the rescue work by the Singapore Police Force and the SCDF.

In a statement, Mr Kenneth Er, the Chief Executive Officer of the NParks Board, said:

"A 40m tall Tembusu Tree of 6.5m girth was uprooted at 4.25pm today at the edge of Palm Valley in the Singapore Botanic Gardens.

"We are investigating the cause of the tree fall.

"We are sad that there was one fatality and four other injured persons.

"Our priority now is to accord assistance to the families of the deceased and the injured."