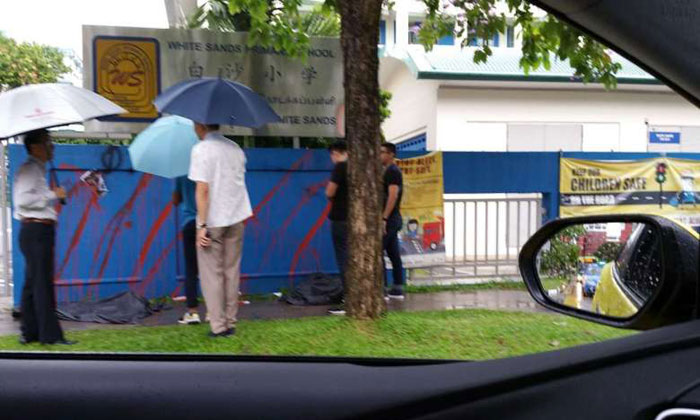 Splashes of red paint streaked the wall beside the school's main gate in Pasir Ris Street 11, while "O$P$" was daubed in black paint.

This is not the first time that loan sharks have targeted schools and workplaces they believe are associated with debtors. Last month, a man was convicted of splashing paint at a Tanjong Pagar pre-school attended by a debtor's children.

Taxi driver Koi Eng Yeow, 46, said he spotted the graffiti while driving past the school at around 8am yesterday to pick up a passenger. "I asked myself, 'Oh my God, what is this? Vandalism! So many lines (of paint) and "owe money, pay money".' "

It is understood that the school carried on as usual, with White Sands Primary representatives declining to speak to the media.

Police were notified at around 7.20am and remained at the scene for several hours, including during the pupils' morning recess time.

When The Straits Times visited at around 1.30pm, as pupils were being dismissed, the wall had been repainted and the paint was already dry. A security guard was seen patrolling the external perimeter of the school grounds.

Madam Sherine G., 68, a retiree who has lived near the school for about four years, said: "It's very quiet and peaceful here. Vandalism is not a problem that I have heard of, and, as far as I know, there is no loan shark activity." She had neither seen nor heard anything related to the graffiti.

Police have classified the case as "unlicensed moneylending harassment" and are investigating.