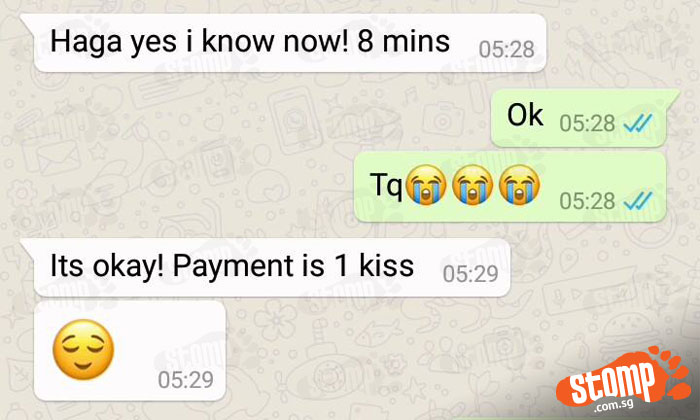 Stomper Shirley had an unpleasant experience with a driver who tried to hit on her.

After the driver had dropped her off at her location, she realised that she had misplaced her house keys.

She then called the driver thinking she might have left it in the car.

The driver then offered to come back to her place and give her a ride back to Clarke Quay to find her keys.

Initially, she was thankful towards the driver for helping her but then the messages took a weird turn when he told her, "Payment is one kiss".

That's when the alarm bells rang.

She screenshot the conversation and sent it to one of her guy friends.

"This is so unacceptable.

"He also asked me to sit beside him because this time I was not his passenger but I told him that I was dizzy and lazy to move.

"Luckily, I called a friend to help me out.

"The driver left after my friend paid him for sending me back to Clarke Quay and now I'm safe.

"I want to warn other girls, no matter how drunk they are to please ask their friends to send them home and not to go back alone.

"There are drivers that cannot be trusted."