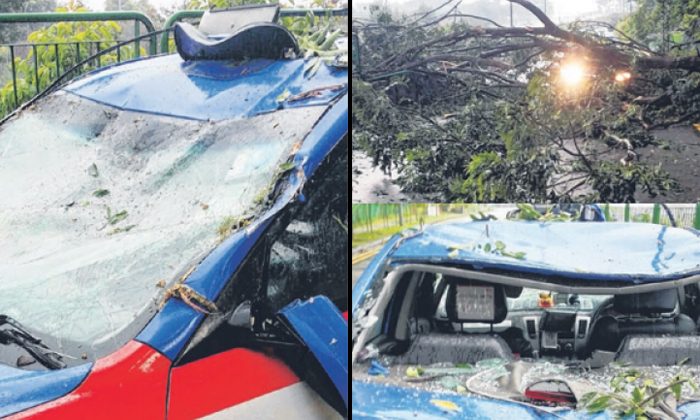 A tree fell on a taxi in a rainstorm on Tuesday (Jan 10), denting the vehicle and shattering its rear windscreen.

The incident occurred at about 5pm on the Central Expressway (CTE) towards Seletar Expressway (SLE), near the Ang Mo Kio Avenue 5 exit, Shin Min Daily News reported on Wednesday.

The driver of the taxi, who gave his name as Mr Zheng, told Shin Min that he had been driving at a normal speed when the tree came crashing down.

"Suddenly, there was a loud sound on the top of the cab, and the whole vehicle shook. I immediately braked," said the 57-year-old.

He added that his sole passenger, a woman in the backseat, was shocked by the impact.

However, they recovered quickly and got out of the vehicle.

Although the damage to the taxi was severe, Mr Zheng said he was relieved that he and his passenger had escaped unharmed.

The woman, who was in her 60s, hailed another taxi to get to work.

The fallen tree created a traffic jam that extended for up to 4km.

The Land Transport Authority in a tweet on Tuesday at 4.57pm said the Ang Mo Kio Avenue 5 exit was closed due to an obstacle on the CTE towards SLE.

The Straits Times understands that there were no reported injuries and no one was taken to hospital.

Police were at the scene to facilitate the flow of traffic.