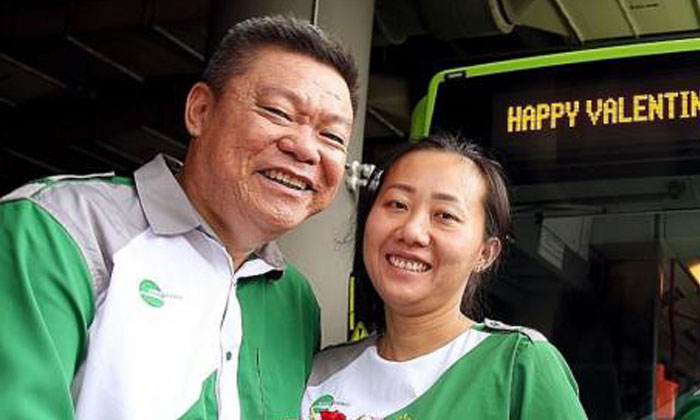 That was in May 2011 and the couple were brought together by their relatives. They registered their marriage in August that year.

Mr Goh, now 52, and Ms Chen, 35, both work as Tower Transit bus captains. They have a four-year-old son.

There are at least five married couples who work at Tower Transit.

Tower Transit has had a "Happy Valentine's Day" message on its bus electronic signage since Friday.

Years back, when Mr Goh learnt that Ms Chen - who was living in Hainan, China - would be in Singapore to visit a niece, he took a gamble and met her.

He said: "I was in my forties and still unmarried. Little did I know, I'd get the top prize."

Ms Chen said: "On the first day we met, he asked me what time I had to be home. I felt he really cared about me and respected me."

After they got married, she quit her job in Hainan and moved to Singapore.

In 2015, the couple joined Tower Transit as bus captains because they wanted more time together.

Ms Chen works the afternoon shift on feeder bus 284 at Clementi Bus Interchange, while Mr Goh, an interchange supervisor, rotates around interchanges and the Bulim Bus Depot in Jurong West.

When they are on the afternoon shift, they have lunch together before work.

But when they are on different shifts, they get to meet for only 15 minutes a day.

Mr Goh said: "It is not very long, but I look forward to it because we get to share our day with each other."

Mr Glenn Lim, Tower Transit's group communications director, said: "The job of a bus captain is challenging. They work on weekends and over festivals, and that requires their partners and families to be understanding.

"The couples in Tower Transit know the rigours of the job and support each another through it."

He blows her kisses on the road

Just so he can blow her kisses as their buses pass each other.

They got married that same year.

Both originally from Johor Baru, they are now Singapore permanent residents.

They are among at least five married couples at Tower Transit and have two sons aged 17 and 14.

Mr Toh joined SBS Transit in 2000, and Ms Teh joined shortly after.

He joined Tower Transit in January last year and his wife followed suit in November.

She said: "If we work in the same company, we can eat and travel together. We get to spend time together."

Ms Teh drives feeder services 284 and 282 in Clementi and rotates between morning and afternoon shifts.

Mr Toh drives all routes and is on the afternoon shift.

He said: "When I know that my route will pass hers, I will keep a lookout for her. If we happen to cross paths, I will blow her a kiss and wave at her."

They also go for lunch and dinner breaks together.

When she gets home from work exhausted, Mr Toh gives her a massage.

She said: "We are really compatible. I am timid, but he is brave. I like to talk, and he listens. Without him, I will not dare to try anything. I will hold on to him for life."

When asked what was the secret to their marriage, Mr Toh said: "There is no secret. Once you think about how your life will be without the person, you will see how important he or she is.

"For me, I can't imagine my life without her."